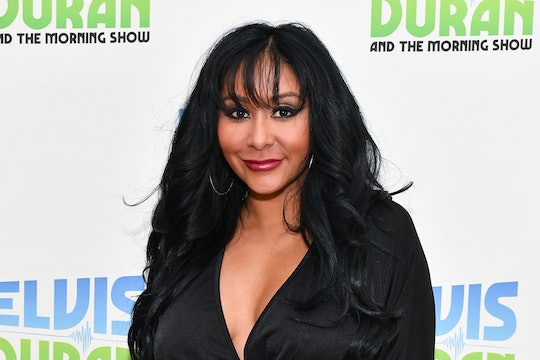 Although it's been more than a few years since the original Jersey Shore was at the height of its popularity, it can be difficult to separate the original cast members from who they were back then to who they are today. (Especially the ones who are now parents!) Jersey Shore: Family Vacation has given fans a glimpse of how Mike Sorrentino, Nicole Polizzi, Ronnie Ortiz-Magro, Deena Cortese, and the gang have been up to since the "glory days" of partying and hooking up. However, when they're not filming, several of them are parents living relatively normal lives at home. So let's take a look at seven times Nicole 'Snooki' Polizzi got real about motherhood.

To catch you up to speed, Polizzi and her husband Jionni LaValle currently have a son, Lorenzo, 6, and a daughter, Giovanna, 4 — and they have another baby boy on the way, Us Weekly reported. The reality star hasn't yet confirmed when she's due, however a 15-week bump photo would put her due date somewhere in the ballpark of early-to-mid June. Needless to say, though, Polizzi is no stranger to this whole motherhood business. In fact, the former party girl has actually offered quite a few gems of parenting insight — making it clear she's more than ready to take on baby number three.

1. When she acknowledged her kids fight all of the time.

Snooki first revealed her baby news back in November — and apparently, she's hoping the excitement of it all will distract her kids from fighting all of the time. "They've been asking for another baby," she said in a recent YouTube video. "Hopefully it will calm them down because these two, they're 6 and 4, they're are always attacking each other and I want to just drink a bottle of wine. Now I can't, so hopefully this will settle them down and get excited." LOL. Good luck with that one, Snooki.

2. When she described the hardest/best parts of motherhood.

3. That time she shared a kid-crying-on-Santa's-lap photo.

Another ultra-relatable moment? That one time Giovanna completely lost it while sitting on Santa's lap, according to HuffPost. (Because who among us hasn't been there at least once before?) Snooki captioned the classic holiday photo by channeling her son's thoughts, writing, "'Sissy stop embarrassing me in front of the big man. '🎅🏽" Aww. Poor Giovanna.

4. When she had to explain stretch marks to her kids.

Is it just me, or are kids always asking questions about the most parts of your body that make you feel the most insecure? Well, Snooki's explanation for her stretch marks are about as real as it gets. In March of 2017, she shared an Instagram photo of herself showing Lorenzo and Giovanna her belly. "This morning my kids asked why I have lines on my stomach," the mom of two wrote. "I had to explain to them that it's my tiger stripes I gained when I became their mommy. They thought it was so cool and can't believe how they fit in my belly. 😩😩😩😩" Hmm, tiger stripes. I like it.

5. That time she acknowledged moms need to get out, too.

Just because you have kids, doesn't mean you suddenly lose the desire to go out with your friends. And Snooki knows this all too well. "Me and Jenni always stress that even though you are a mom, it doesn’t mean you are dead," she told People in May of 2018. "I always say, you need to just get out once in a while and just find yourself and be you. I feel like that makes you be a better mom." Amen!

6. When she revealed her date nights are the same as yours.

As it turns out, date nights are pretty low key at Snooki's house. "Jionni and I are homebodies and we co-sleep with the kids (so do Jenni and Roger), so we basically get the kids to sleep and meet each other in the spare room with a bottle of wine and we watch movies," she told People. Sounds pretty familiar, right?

7. That time pregnant Snooki shared a photo of herself vomiting.

Along with the majority of moms-to-be, Polizzi struggled with pregnancy-related nausea and vomiting. Not long after Snooki revealed she was pregnant with her third child, she shared a photo of herself hunched over a toilet and vomiting. She captioned the Instagram post with, "Happy Friday! #PregnantProblems #JesusTakeTheWheel #CouldI😞."

So in case you had any doubt, Nicole Polizzi knows exactly what she's getting herself into this time around with baby number three. From experience, having three kids is definitely a challenge. But these all-too-real moments from Snooki are all the proof I need that she's prepared to rise to the occasion.

More Like This
Chrissy Teigen Gives a Cheeky Behind The Scenes Peek Into Her Pregnancy Glam Squad
Dr. Jill Biden Just Delivered Some Frank, But Powerful, Advice On Motherhood
Reddit Applauds Mom Of Five Who Stood Her Ground & Left Sleeping Dad Behind
A New Survey Shows 74% Of Women Would Drain Their Savings On Maternity Leave