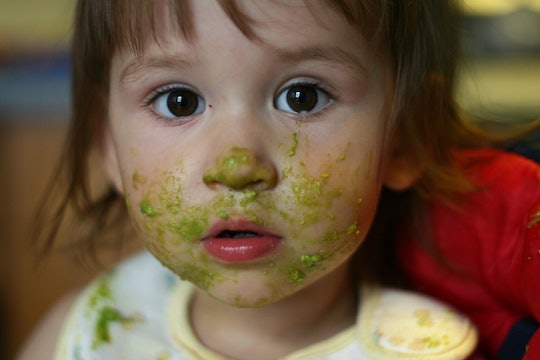 7 Times When You Actually Hold A Grudge Against Your Baby

Oh, hello there, kind neighbor. Why don’t you come sit next to me and I’ll casually change my cardigan and drop some knowledge on you, Mr. Rogers-style. Here’s the real scoop: Sometimes, I get mad at my kid. Even if I know whatever is ailing me has very little to do with him. Like the choice he made yesterday to throw soup on the carpet wasn’t really a choice so much as an urge in his mushy, unformed brain that made him go, “Yep, totally going to do that.” And I know that technically it’s kinda my fault that this happened because as much as I want to think that he’s fully equipped to handle spoons, it’s just not the case. Like all parents, I believe that he’s super-gifted and a genius, but deep down I know I should probably chill and accept his age-appropriate limitations. Genius or not, he's no spoon prodigy. I need to bring my A-game during mealtimes these days, whether I like it or not. Point being, that spilled soup but at least mostly my fault, but I was pissed at him about it anyway.

Seriously though, kids are hard and parents can get frustrated. This isn’t news. What I’m here to talk about now are the ridiculous things that I’ve decided to be mad about. It’s not the fact that I have no freedom or privacy in my home, or that my body will never be the same. (OK, yes, it is those things too sometimes.) Mostly, it’s the little, stupid stuff that causes me to hold an admittedly irrational grudge against my baby. Like, I resent him over these tiny, insignificant things. And you know what? I know I'm not alone in this. It's fine, guys. We not only get annoyed at our babies in isolated moments, we pettily hold onto actual grudges for whole hours (OK, days). And we usually do so over stuff like this.