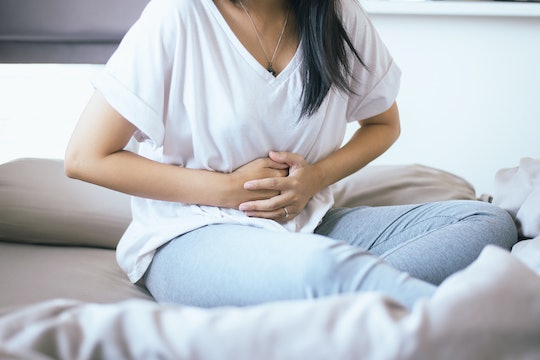 Stomach pain might not be a daily occurrence for most people, but nearly everyone experiences it at one time or another. And while it might typically be something relatively minor, like motion sickness, lactose intolerance, or stress, it could also be something far more serious, like an infection, disease, or sore. Luckily, there are often some warning signs your stomach pain is actually an ulcer, or some other potentially-serious condition, and if you notice them, you should pay attention and likely seek medical attention as well. The problem is, many of these so-called "warning signs" of an ulcer can also be symptoms of a ton of other conditions, which means it can be hard to tell if what you're experiencing is, in fact, an ulcer, or if it's something else.

Although some people mistakenly believe that ulcers can form due to too much stress and anxiety, there are two things that cause most — but not all — ulcers to form. In a piece that she wrote for the New York Times about some of the things that she learned when she was diagnosed with an ulcer, health reporter Catherine Saint Louis noted that both taking a lot of NSAID pain relievers (aka nonsteroidal anti-inflammatory drugs) like ibuprofen and a bacterium called Helicobacter pylori are common causes of ulcers.

If your stomach pain matches certain characteristics or comes along with other specific symptoms, that might mean that your stomach pain isn't a run-of-the-mill upset stomach at all, but rather, an ulcer. Ulcers can often be treated relatively easily (though the pain is still very real and very disconcerting), but if they're left untreated, things can get worse.