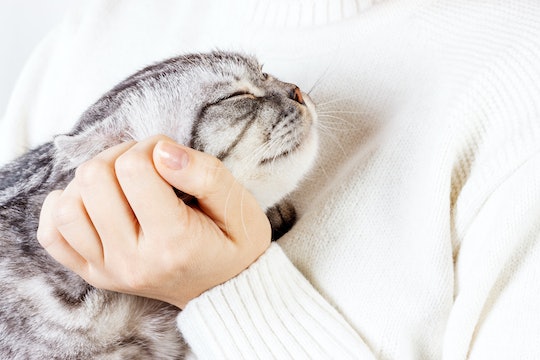 As a cat person myself, I will happily argue with anyone who thinks cats aren't affectionate. I can't remember a time when I didn't have a cat, and in fact, I currently have cats in two different countries (thank goodness for in-laws)! Since my parents have a big old barn, we always used to have a selection of cats running around when I was growing up. Some were jerks, some were downright odd, but almost all of them were affectionate in some way or another. If you're new to the feline game, here's how cats show affection, because it can be hard to tell.

Cats show affection by kneading you with their claws, purring, and even flicking their tails in a certain way, among other ways. Catster explained that while cats can be abrupt at times, "Cats are very good communicators, using a combination of body language, postures and vocalizations to express their feelings." The key, of course, is to be able to pay enough attention to actually pick up on those indications that your cat is affectionate.

If you think your cat isn't showing you any love, have a peek at some of these signs that have nothing to do with nuzzling you on the couch while you watch Netflix. Some cats show their feelings in unconventional ways, like by bringing you a mouse than actually cuddling with you.

More Like This
How To Tell If Someone Is Lying To You: 34 Signs To Watch For
How To Support A NICU Parent, From Moms Who’ve Been There
21 Brilliant Homemade Halloween Costumes
Hocus Pocus Party Inspiration To Put A Spell On Your Guests