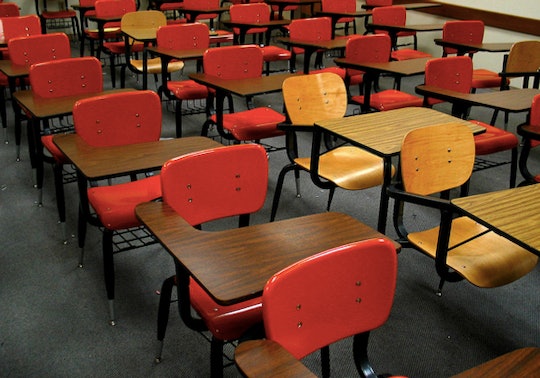 In order to decrease the number of STIs and pregnancies in teens, schools need to step up their sex-ed game. But, instead of informing teens about sexual health, there are some disturbing ways sex-ed is shaming kids in schools. This is all kinds of messed up, because school is a place kids turn to for knowledge and power, which go hand-in-hand. But in 2011, approximately 24 percent of new HIV diagnoses were young people ages 13 to 24, according to a 2016 report published by the National Conference of State Legislatures.

When schools are withholding information that can save a teen's life, that's not only shaming kids, it's downright shameful. What's even more frightening about the aforementioned statistic is that it's preventable. But in order for this to happen, school sex-ed curricula needs an overhaul in the United States, where there is no federal policy in place that guarantees what kids are taught about sexual health.

The emotional health of kids is also at risk if people don't advocate for a more progressive way of communicating human sexuality to today's youth. This requires sex-ed curricula to be sensitive to the experiences of all kinds of kids, from those with disabilities to the LGTBQ community. Rather than giving these teens the support they need, sex-ed can sometimes end up shaming kids and doing an entire generation a disservice. So what needs to change? A whole lot.