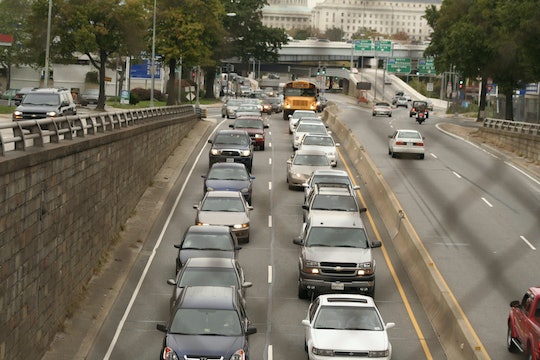 7 Ways To Entertain Your Kids In D.C. Traffic, Since Crying Is Not An Option

Anyone who lives in the Washington, D.C. metro area knows that traffic can strike at any time. (And yes, it will strike every time.) You might think you're taking a quick jaunt to the mall, and you end up in the car for an hour, grasping at the last threads of your sanity. A simple errand with kids in tow stretches out over years (OK, maybe not years, but a long time), and frankly, it's impossible to get anything done. So how do you keep your kids entertained in DC traffic? Well ...

Aside from trying everything short of giving up and going home (which, for the record, is a totally viable option), there's only so much you can do in a car with less-than-thrilled kids who are eager and anxious to get out and move and break and destroy things. There's only so many "we're almost there!" lies you can tell them before they catch on that no, we're not almost there — in fact we're not even moving!

So before you resort to banging your head against the steering wheel (again, totally fair — you won't get any judgments from me), there are a few tricks of the trade you can try before you give up and try to get into an exit lane. (Fair warning: it's probably going to take awhile.)

Here are some tips I've picked up over the last couple years of surviving traffic jam after jam.