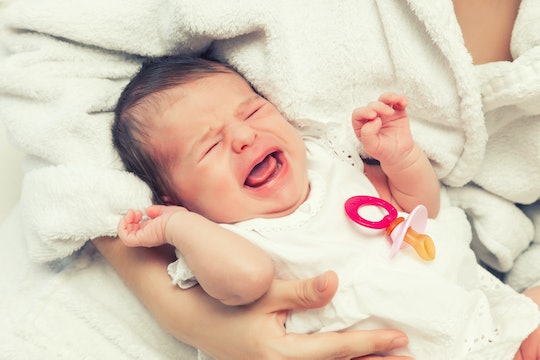 It's a period every parent dreads, but one that unfortunately affects a large percent of babies — colic. Your baby was only born a few weeks ago, and it seems they spend the majority of their time crying in pain. Despite your best efforts to comfort or nurse them, they're inconsolable. As ambiguous as colic is, there are several ways your baby is trying to tell you they have colic that you definitely shouldn't ignore.

According to Parents, colic is somewhat of a "five letter word for 'I don't know'" meaning most pediatricians don't know the exact cause of your baby's internal pain. As hard as it is to handle, you can take a bit of comfort in the fact that around 15 to 25 percent of newborns experience colic, according to Parenting.

The good news, according to Kids Health, is that colic generally goes away before your baby turns three or four months old and typically peaks at six to eight weeks. Meaning it won't last forever. But that doesn't make it any easier to deal with though, so doing your best to find the cause of what's causing your baby's colic will ease the pain sooner rather than later.

These tell-tale signs of colic are what most pediatricians will use to "diagnose" your child with the somewhat confusing sickness that is colic.