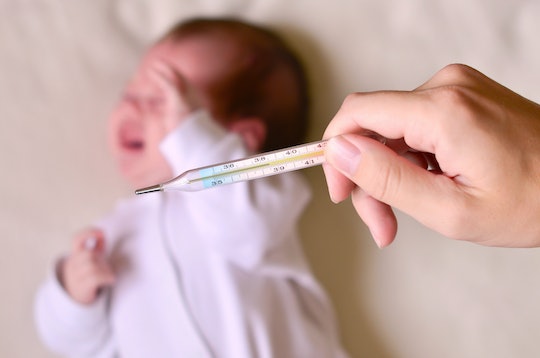 7 Ways Your Baby Is Trying To Tell You They're Sick

Sometimes trying to figure out if your baby is sick feels like one big guessing game. For one, babies can't really communicate. The other challenge is that babies do things on a daily basis that parents, freak out about or consider weird, that in all actuality are normal and not signs of sickness. I can't tell you how many times I called my daughter's pediatrician asking "is this normal?" Thankfully, there are definite ways your baby is trying to tell you they're sick that you can pick up on once you know what to look for.

My first born daughter used to have what I perceived as weird breathing patterns. They were like snorts, grunts, and audible gasps alternated with shallow breaths. I didn't know what to make of it ... ever. I'd call her pediatrician and say, "She's really breathing weird right now, I don't know if something's wrong."

The nurse on the other end of the line would politely ask her routine questions including, "Did she swallow anything like a coin or a battery?" I responded, "No," but who could ever really be sure, right? I drove myself crazy (probably the nurse too), and in the end always opted to bring my daughter in for an examination with the doctor. Nothing was ever found and my doctor would tell me over and over again, "Babies just breathe weird."

Thankfully there are some surefire indicators to whether or not your baby is actually sick, which could either save you a trip to the doctor's office or indicate that you need to get your baby seen ASAP. Here are seven ways to tell if you're baby is sick.