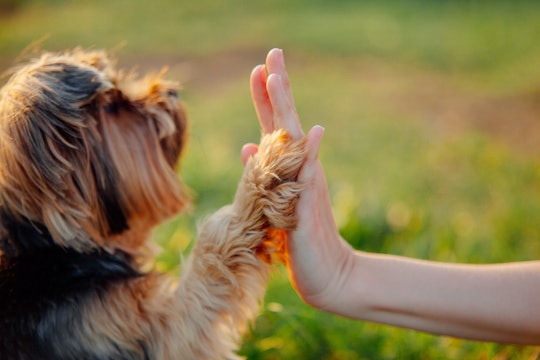 Here’s How To Understand Your Dog Better, According To Trainers

They may be your best friend, but dogs communicate very differently than people. Sometimes the dogs' messages get lost in translation, even when the owner has only the best intentions at heart. That's why the ways you're totally misreading your dog are so important to understand. Your dog is communicating with you all day long, but sometimes the subtle messages get overlooked.

To learn more, Romper reached out to two excellent professional dog trainers who have years of experience with all sorts of canines. Devan Amundsen is a certified dog trainer and behavior consultant with the Petaluma Animal Services Foundation, and its website is at ArmyOfKindness.net. He is also an instructor at Bergin College of Canine Studies. Linda Keehn is a certified professional dog trainer and dog behavior consultant at Positive Canine Training and Services. She has worked as a trainer for over five years, and she has experience with rescue dogs and therapy dogs as well. They agree that effective communication with your dog is crucial. "So much grief for dogs and humans could be avoided if we understood better what our dogs are trying to tell us," said Keehn. Thanks to their years of professional insight, these trainers can make communicating with your pup easier than ever.

More Like This
How Much Hair Loss Is Normal? 9 Signs You’re Losing Too Much Hair
23 Frightfully Fun Facts About Halloween
Where To Go Pumpkin Picking In Texas
Can Elderberry Help Prevent Illness In Kids? Doctors Weigh In