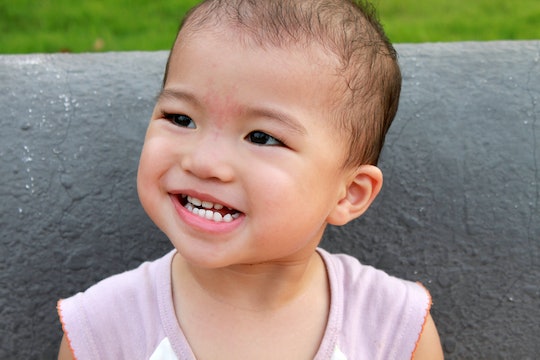 In the beginning, your baby can only communicate with you through cries, leaving you to use your detective skills to figure out what she's trying to tell you. But it won't be long before she begins to use coos and other basic sounds to express herself. But when does it turn into something you can actually understand? As she begins to babble, you may be wondering exactly what words should be a part of her vocabulary. If you're concerned that your little Einstein isn't saying enough, you might want to know exactly what words your kids should be saying at 12 months.

According to What To Expect, most babies begin communicating with words between 9 and 14 months. And although the average child can say up to three words at 12 months, they can understand about 50 words, according to the PBS Parent's website. And that number is growing every day. By age 2, your child should know between 200 and 300 words, according to Care.com

You can help your baby with his growing vocabulary by doing plenty of talking. As What To Expect suggested, describing activities as you move throughout your day can help baby begin to associate words with the appropriate object or action. Additionally, reading and singing are great ways to introduce your child to new words and sounds.

As always, this list is meant to be a guide. If your child isn't saying saying much, give it time. Soon "why" will become his favorite word and you'll long for the days when all he did was grin and drool.