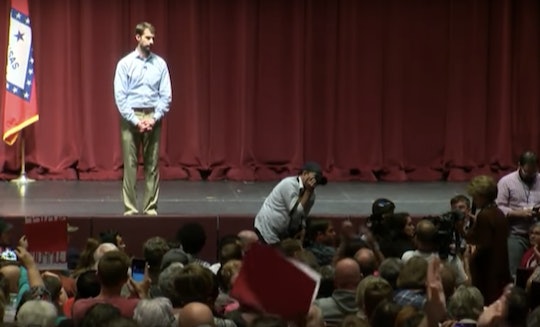 Who said politics was only for grown-ups? Voicing the concerns of his own demographic and speaking on the behalf of kids everywhere, a 7-year-old who asked a question at Sen. Tom Cotton's town hall on Wednesday night posed a political inquiry that's been weighing heavy on his mind. If President Donald Trump is building a wall along the United States' border with Mexico, he wondered, what's going to happen to Sesame Street?

The stage was set at Arkansas' Springdale High School auditorium, where constituents questioned Republican Cotton, asking the senator to address their concerns and take their needs into account. Among these constituents appeared 7-year-old and future senator himself, Toby Smith. "Donald Trump makes Mexicans not important to people who are in Arkansas, who like Mexicans," Toby began. "Like me, my grandma, and all my people," he explained. The crowd immediately erupted in cheers on his behalf, as he continued: "And he's deleting all the parks and PBS Kids just to make a wall. He shouldn't do that. He shouldn't. He shouldn't do all that stuff for just a wall." Again, the crowd couldn't contain its enthusiasm.

"Toby, how old are you?" Cotton asked. "I'm almost 8, but I'm 7," Toby clarified. From there, Cotton assured him: "We are a melting pot. We are all one people." In addressing the building of a border wall, Cotton told Toby, "We also have to protect our own citizens, and that’s where the wall comes in."

You can hear Toby pose his question to the senator in the video below:

In an interview after the town hall, Toby was able to clarify his platform even further. Speaking to local station KATV, Toby explained that he felt the need to speak out because "Donald Trump was deleting PBS Kids just to build a wall because he doesn't like Mexicans." To Toby, this trade-off doesn't really hold water: "People like parks, people like PBS kids, and the Mexican wall — people like Mexicans," he insisted, with a shrug. Watch his insight below:

Toby's compassion and concern for others — and not just for the preservation of his Arthur cartoons — was a light amid a hall of unsatisfied citizens who are upset with the direction envisioned by Trump's leadership. Toby managed to lump in a lot of issues in one inquiry, all questioning Trump's proposed allocation of federal funds in some way or another.

In asking the tough questions, Toby became a national hero, so much so that the hashtag #toby4present was circulating on Twitter that same night. Civically engaged from such a young age? He's got our vote.

More Like This
What Exactly Are Minions, Anyway ?
Victoria Beckham Reflects On Being Forced To Weigh Herself On TV After Giving Birth
Barack & Michelle Obama Shared The Most Adorable Baby Photos Of Malia On Her Birthday
Megan Fox Explains Why She Asked Machine Gun Kelly If He Was Breastfed As A Baby