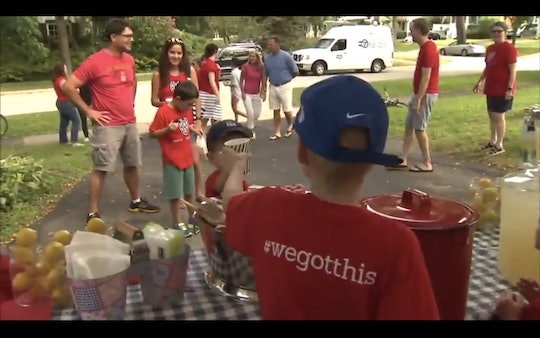 7-Year-Old Cancer Patient Raises $20,000 Through His Lemonade Stand To Help Others

Tough situations can bring out the very best in people, as has been shown by Benjamin Burke of Glen Ellyn, Illinois. The 7-year-old cancer patient raised $20,000 through his lemonade stand, and donated the entire sum to a foundation that works to "raise money for cancer research and to provide support to children and their families battling the disease." Benjamin and his family gave their lemonade spoils to the Anthony Rizzo Family Foundation (ARFF), which helps Chicago Cubs First Baseman Anthony Rizzo to better the lives of other cancer patients and their families.

In a blog post titled "When life hands you lemons, make a lemonade stand," Benjamin's mother Jennie shares how the event came to be. Jennie started a "little homespun baking business" a while back, selling cookies, lemonade, and ice cream sandwiches with her three boys. Though the boys asked for a stand time and time again, Jennie resisted because it's exhausting "having to 'do cancer' with every person [she sees]." Ultimately, Jennie found the strength to pull it off, so she began baking and her sons started drawing up posters.

Jennie posted a video to their Brave for Benjamin Facebook page and had friends share the story. It was a hit — local news teams even stopped by to interview Benjamin about his fundraising as well as his cancer. A friend's law firm had offered to match the money raised by the stand. Jennie reports that, including The Case Law Firm's match, they're at $20,763.44 and counting. That stand must have had a big money box.

Benjamin chose ARFF due to his personal relationship with the founder. Rizzo, who is eight years free of Hodgkins Lymphoma himself, has been a friend and mentor to Benjamin as he keeps fighting. Just days after his 7th birthday, Benjamin was unexpectedly diagnosed with T-Cell Acute Lymphoblastic Leukemia. As he continues to fight through month nine of his 3.5 year treatment plan, Benjamin also continues to devote his energy to helping others in his partnership with Rizzo.

Love from Benjamin's community is not only helping his battle, but is helping the battle of other affected families, too. Jennie continues to post daily updates on Benjamin's progress through Facebook. Just recently, she shared that Benjamin was filmed alongside the Cubs for the Cancer Knows No Borders campaign. Jennie captions the photos:

After the filming we had the privilege of joining two other incredible cancer families for some VIP treatment at the Cubs vs. Brewers game. The joy in Benjamin's eyes during batting practice and getting a personal thanks from Anthony for his insanely successful lemonade stand was worth all of the emotional heartache required to tell our story on film.

If you're looking to help Benjamin out, there are plenty of way to do so. You can send Benjamin your Thoughts and Well Wishes on his Caring Bridge page or you may donate to Benjamin's cancer treatment. You can even donate to ARFF on his behalf to give the world some more lemonade.