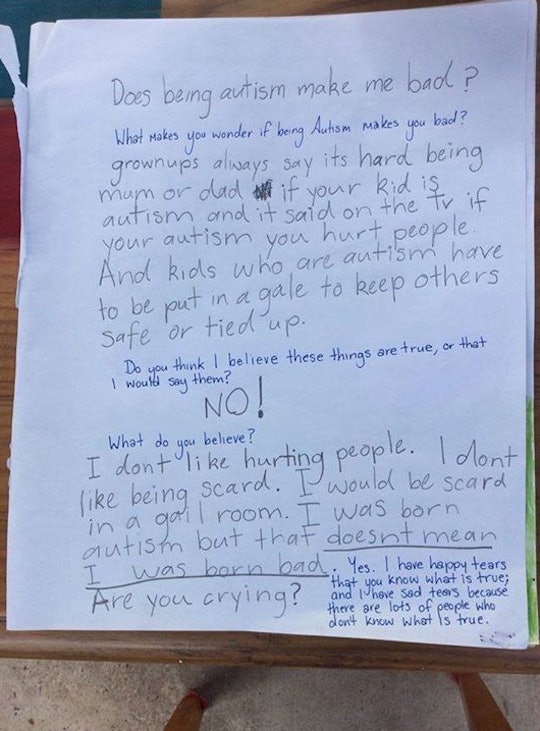 OK, maybe someone knows the age when kids can understand what you're saying, but I admit, sometimes I feel like I’m walking a fine line around my 4-year-old daughter, determining what goes over her head and what she actually takes in. As a parent, I can get lulled into the belief that my child isn’t listening or doesn’t yet comprehend what I’m watching, listening to, or talking about with others when she's in close proximity to it. After all, there are no solid guideline that distinguishes between “the time before they understand things being said around them” and “ the time when oh crap, they understand everything now." I don’t think I’m alone in this, either. I think most parents are constantly trying to figure out how much they need to filter for their kids at different stages of their development.

That’s why when I saw this photo of a note from a 7-year-old with autism to her mother, I needed a moment. Can you imagine realizing that your child has been walking around with the idea that she was a bad person? As a mother, I find that to be a horrifying thought. Sure, my daughter doesn’t have sensory processing issues, and she still blows my mind over what she sometimes picks up on. My heart breaks for every child like Cadence, who is listening in on a conversation that is ultimately making her think she is anything less than wonderful.

As parents, or really as adults, we often underestimate what our children can understand or, even worse, what they are listening to and not fully comprehending. And let me tell you, there is nothing more heartbreaking than a child who isn’t able to see the full picture, and therefore comes to a horrible conclusion by filling in the blanks on their own. Just ask any parent whose child has assumed that being yelled at means they are no longer loved. No, it just means you were being a jerk for a minute, or maybe it doesn't mean anything about you at all, but to a kid, that incomplete picture presents something entirely different, and potentially more damaging.

Cadence’s mom Angela is sharing a powerful message that all of us need to take note of: Children will listen, whether we think they are listening or not. And they will often come to their own conclusions, which are not always good ones. The way that she handled this crisis with her own daughter is a clear indicator of what an incredible mom she is. We can all learn from her, don’t you think?

And here’s Bernadette Peters singing “Children Will Listen” from Stephen Sondheim’s Into The Woods. Because we all need a little musical theatre in our lives, especially when the message is so on point.

Bernadette Peters is so made of magic that she almost made this letter not the biggest bummer in the world. Almost.

Image: Courtesy of I Am Cadence/Facebook(2)