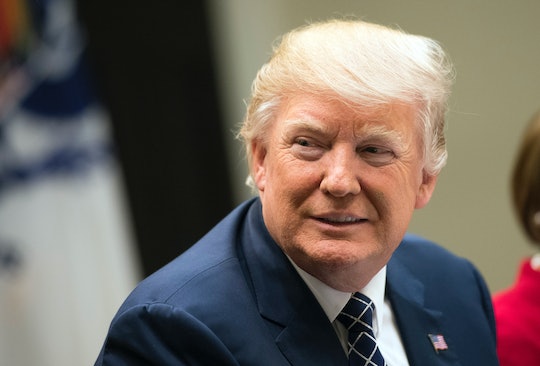 In his first joint address to Congress, President Donald Trump called for support for his national child care proposal, telling Congress members, "My administration wants to work with members of both parties to make child care accessible and affordable to help ensure new parents that they have paid family leave." But according to a recent report, 70 percent of the benefits in Trump's child care proposal go to families making more than $100,000 a year, while taxes are likely to increase for a number of people, including some single parents. So how does it all work?

Trump hasn't updated his proposed child care plan since his presidential campaign, so expert analyses have been limited to that proposal, which was released in September, according to Bloomberg. A few things, like six weeks of paid maternity leave, would be undeniably positive for all parents involved (well, at least for the moms involved; paternal leave was never mentioned in Trump's plan).

But Trump's child care proposal mainly revolves around tax deductions, and that's where the benefits to all (pun intended) get a little murkier. Trump's proposal would allow individuals who earn less than $250,000 — and couples whose combined earnings are less than $500,000 — to deduct child care expenses from their income taxes. Lower-income families would receive a larger earned tax credit for their expenses. Estimates by the Tax Foundation, a non-profit research group, put the cost of this policy at around $500 billion for the federal government over the course of 10 years.

The thing is, in order to receive the deductions Trump is offering, parents need to actually be paying income taxes in the first place. I don't mean just filing taxes, either — according to CNN, many working class families don't pay federal income taxes because they don't earn enough money to actually owe the government anything.

On top of that, those who do pay income taxes would receive bigger breaks depending on their income. As PolitiFact explained, tax deductions are "worth more per dollar" for those who make more money, since those with higher incomes face higher tax margins. As explained in a study by the Tax Policy Center, with Trump's child care tax breaks, families would see after-tax income rise — on average — by 0.2 percent, or $190. But those making less than $40,000 would only see an increase of 0.1 percent, or $20, while those making less than $100,000 would see their after-tax income grow by 0.3 percent, or $360. The richer the family or individual, the more they benefit from Trump's child care proposal.

In an email to PolitiFact, study co-author Chye-Ching Huang wrote:

According to tax experts, it seems the biggest breaks would go to the American families who need it least. Child care in the United States is expensive, and low- and middle-income parents need a system that will allow them to raise their children and work at the same time.