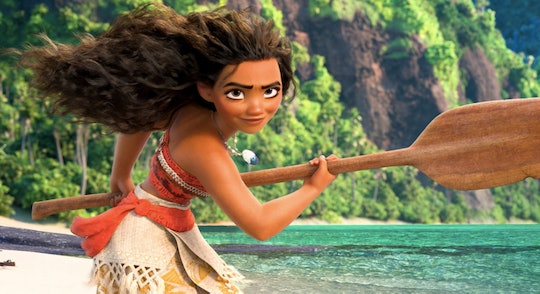 If you're a mom, you've probably sat through countless viewings of Moana with your kids this year, trying to keep that catchy "You're Welcome!" song from getting stuck in your head. On screening number 72 of the film, you might have started wishing it had been released before you gave birth, because now your daughter is asking for permission to change her name, and had you watched this fearless heroine while pregnant, her name would have surely be high on your baby names list. You're not alone in feeling this way because baby girl names inspired by Disney characters are evidently on the rise.

According to BabyCenter, naming your child after a Disney heroines was among the hottest baby name trends in 2017, along with coining monikers after rappers, colours and basketball players. The name Moana will have a distinctly Disney ring, since it wasn't a name most of us had heard until 2017 brought it in with a bang, or rather, with a song. But other Disney heroine-inspired names are favorites that have been around since we've been glued to our televisions as kids, and they, too, experienced a surge in 2017.

BabyCenter counts Moana and Tiana as some of the newer Disney heroines to add to the trend of baby girl names, but old-school heroines like Ariel, Nala and Jasmine are also on the rise. And thanks to the recent remake of Beauty and the Beast, your little one could be sitting next to a Belle (or two) in school in just a few years.