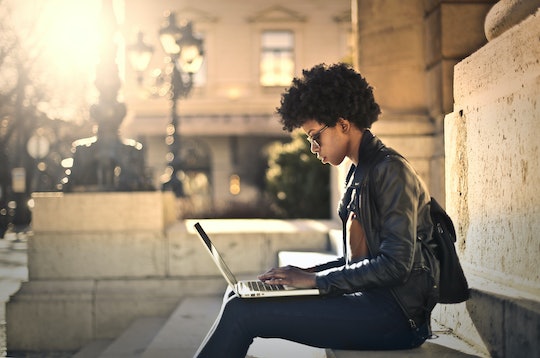 For the past five years, my husband and I have been trying to conceive and at times, Facebook has been my worst enemy. You just never know when you're going to open that little blue-and-white app to find another acquaintance is dropping the pregnancy bombshell that sends you into a frustrated tailspin. At this point, I've seen so many Facebook posts every woman who's trying to conceive (TTC) dreads reading, and have a tried and true method for dealing with each one of those surprises.

My inner monologue when I see one of those Facebook pregnancy announcements or perfect photo of an acquaintance with her 17 perfect children, is fairly predictable at this stage. It starts with "Ughhhhhh" and then moves on to "Well, that's very nice for them." I'll admit that when we were first trying to get pregnant, that second part was more of a fake-it-til-you-make-it sort of statement I'd repeat to myself, but as time has gone on, it's very much genuine. Although so is the "Ughhhhh" part. Infertility is the weirdest thing, spread so unevenly around and so unpredictable. Social media puts that imbalance right in front of your eyes on a nearly daily basis.

Holidays, of course, provide many opportunities to be reminded that most of the world is pregnant or very fertile, and I sometimes choose to stay off social media on those days and avoid the extra infertility reminders. But sometimes Facebook statuses creep up out of nowhere and hit you when you least expect it. As a trying-to-conceive mama, here's my rundown of tough-to-take Facebook posts.