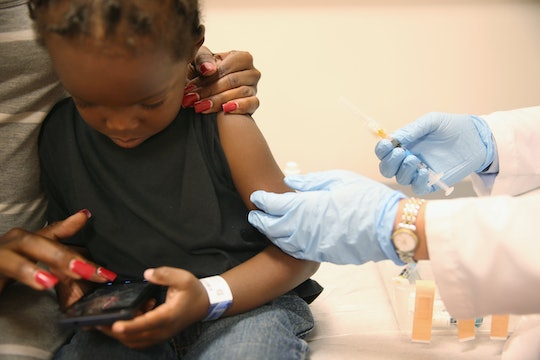 8 Facts About The Measles Vaccine Every Parent Should Know

Prior to the measles vaccine, more than 500,000 cases of the measles were reported and 500 people died. Since then, and after widespread immunization, measles cases in the U.S. plummeted. In 2004, for example, only 37 people contracted the disease. But the anti-vaccination movement has caused the number of measles cases to rise, and now there are at least 107 confirmed cases across 21 states. Knowing the facts about the measles vaccine is vital, not only so you can vaccinate your child according to Centers for Disease Control and Prevention (CDC) recommendations, but so you can debunk any of those prevailing myths regarding vaccines that have allowed diseases like the measles to make a comeback.

According to the World Health Organization (WHO), measles is one of the leading causes of death in children; one that is entirely preventable since there are safe and cost-effective vaccines available. Between 2000-2016, the vaccine prevented an estimated 20.4 million deaths, according to the WHO. In other words, the vaccine works. You just, you know, have to actually take advantage of it.

Sadly, a completely unfounded and consistently debunked myth about the safety of vaccines has encouraged parents to forego immunizations altogether. According to The Washington Post, failing to vaccinate our children is the driving force behind the recent measles outbreak in the United States. Which is, again, why it's important to separate fact from fiction when it comes to the measles vaccine. So with that in mind, here's what you should know about this life-saving immunization:

More Like This
What Is RSV?
Can Elderberry Help Prevent Illness In Kids? Doctors Weigh In
Endometriosis & Your Sex Life
How Much Hair Loss Is Normal? 9 Signs You’re Losing Too Much Hair