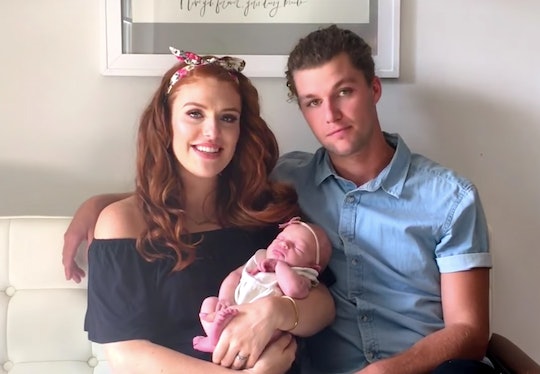 Fans of the TLC reality TV show Little People, Big World love Audrey Roloff. The new mother rose to fame when she married Jeremy Roloff, and now she regularly delights her followers by documenting life, love, and parenthood on social media. And because you probably can't get enough of her on the TLC show, here are some fun facts about Audrey Roloff that you probably didn't know about the Little People, Big World star.

Roloff quickly became a fan favorite when she burst onto the Little People, Big World scene, and viewers were thrilled for her when she gave birth to her first child with Jeremy, an adorable little girl named Ember, back in September. She was very open during her pregnancy, documenting her changing body in regular posts on her blog. And now, since Ember's entrance into the world, she has been very open about the ups and downs of motherhood too, sharing her own battle with breastfeeding (including the dreaded mastitis!) to encourage other moms who might be struggling, as well as posting the most adorable photos of Ember on her Instagram.

But while Roloff spends a lot of time talking about motherhood, and about her relationship with Jeremy, there's plenty more to learn about the reality star, from what she did before she became famous, to what she'll be doing in the future.

Roloff shared on her website that she ran track and cross-country competitively in high school, eventually earning a college scholarship to run for the Oregon State Beavers. And while she ended up throwing herself into running, she had to be bribed into it at first by her father, who was a runner himself. The bribe she took? A first-generation iPod.

2. It Took Her Some Time To Fall In Love With Jeremy

They may seem to have a charmed romance now, but as Audrey wrote on her website, "Jeremy pursued me faithfully and diligently for two years before we started dating." Good thing it all worked out!

3. The Small-Town Girl Used To Live In A Big City

Now, the Roloffs live in Oregon, and spend a lot of time in the great outdoors. But shortly after they were married, Audrey and Jeremy lived for a little while in L.A., where he worked in film production, and she worked in sales at Gallo Wine Company. Eventually, though, Audrey wrote for TLC, "we began to realize that our careers weren't worth compromising our quality of life and the values we held prominent," and so they left La La Land behind.

4. She & Jeremy Are Writing A Book

Loyal fans felt a disturbance in the force recently, when Audrey and Jeremy disappeared from social media for nearly a month. But it was for a very good reason. Turns out that the couple is writing a book, as they announced on Instagram. As Audrey said in the caption:

The book is essentially our love story. We are spilling never before told tales from our dating journey, and all the ups and downs and ins and outs of our love story. The pages are filling up with our failures and successes, what we learned from dating and long distance, and how we prepared more for our marriage than our wedding.

And the break seemed to work — in Audrey's first post back, she wrote that they turned in their manuscript while they were offline.

Audrey lists her Myers-Briggs classification on her website, and according to the website 16 Personalities, being an ENFP means that she's a "campaigner" and "a true free spirit."

Since about age 5 my family and friends have called me “Auj.” Somewhere along the way the “Auj” tacked on a “Poj,” and Auj Poj seemed to perfectly fit my hodgepodged life.

7. She Runs A Joint Marriage Blog With Jeremy

The two run a blog called "Beating 50 Percent," in which they share marriage tips (like Audrey's... very honest assertion that she and Jeremy recite their vows to one another while they have sex).

8. She Created Her Own Clothing Line

Fans of Audrey who still haven't gotten enough of a fix can buy clothing she created for her "Always More" line, which has options for women and babies, all inspired by her philosophy that women should "ALWAYS believe in the MORE that is within them through Christ." (Other fact about Audrey Roloff: she's extremely religious.)

It's clear that Roloff is a super-busy go-getter. Fans will surely have plenty more fun facts to learn about her in the future.