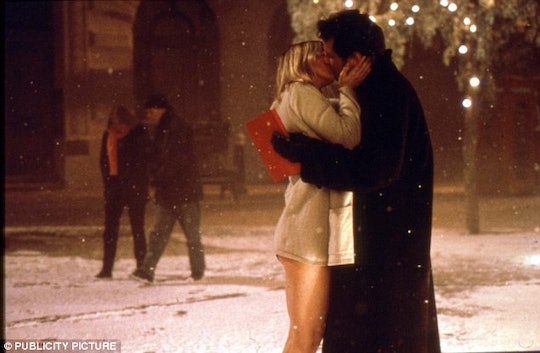 With a blizzard in the forecast, everyone is starting to stock up on the essentials: batteries, food, water, and...someone to smooch? Turns out that, in addition to having a plan for if the power goes out, people are just as concerned with having someone to cuddle up with during the storm. This fact is backed by science: dating app Hinge has released data that proves that, when a storm's brewing', people are actively in search of a blizzard hookup. Last year, for winter storm Juno, Hinge saw a 47 percent spike in activity on the day of the blizzard, and a 27 percent spike in the days leading up to the snowfall. And this is in addition to the many Craigslist adds that pop up around the time of a storm searching for a snow day sweetheart.

Of course this makes sense. With the prospect of a cold, snowy day stuck indoors, what could be better than having someone to heat things up with? Spending the day in bed, watching Netflix, and eating all of the food in the house, with no reason or excuse to leave. Getting snowed in with someone is the perfect way to spend the snow day.

Sure, it's going pretty all-in for a first date. Instead of the hour long prospect of getting a cocktail, you're committing to a full day of nothing but each other, right off the bat. But that makes it feel more like a meet-cute from a romantic comedy. Just think, someday you can tell your grandkids, "We met because we wanted someone to fool around with on a snow day...and the rest is history." Romance at its finest.

Signing on to your dating app of choice in preparation for the storm will definitely yield results, sine we know there will be a surge of users on the site with the same idea. But if you're not a fan of using apps, or if you're looking for a more creative way to scope out your options, here are some unexpected and effective ways to find your nor'easter cuddle buddy.