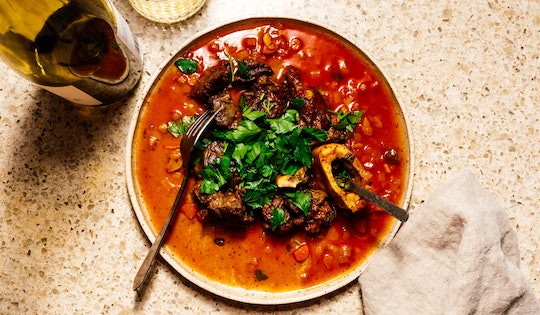 I Am A Food Blog

Passover is one of the holiest holidays on the Hebrew Calendar. It celebrates the time when the Jews (or Israelites) were set free from slavery in Egypt and began their exodus to their homeland. It's a harrowing tale of plagues, adoption, the miracles of G-d, love, and faith. During this celebration, Jews traditionally eat lamb and matzoh, a type of unleavened bread that resembles a large saltine cracker, because that was the first meal Israelites ate after their children were spared in the plague — for all eight days. It can get tedious, but these instant pot recipes for Passover will help make the preparation a bit simpler along with providing exciting inspiration for the trickiest of traditional meals.

Different communities of Jews have different traditions surrounding what can and can not be consumed during the eight days of Pesach. Amongst my friends and family, you will find Sephardic and Mizrahi Jews who abide by the rabbinical laws that prevent them from not only eating leavened or fermented grains known as "chametz," but also spelt, oats, wheat, barley, and rye (and any other grain that will ferment and leaven when exposed to moisture). Then there are Ashkenazi who avoid chamets, but are also called to abstain from what's known as "kitniyot", which are foods like corn, legumes, millet, rice, kasha, hemp, peanuts, etc. Even more complex rules govern some Orthodox sects of Judaism that declare that they should not eat chametz or kitinyot, but also that they cannot mix their matzoh with liquids, in a tradition known as "non gebrokts" eating. Your safest bet is to go with a gluten, legume, and rice-free recipe that does not contain anything that you think could possibly be made into a bread. And of course, there is still no shellfish, no mixing meat with dairy, and no cloven hooves just to keep cooks on their toes and right in the eyes of G-d. It's complicated

Potatoes are your friend. Plantains are a gift from G-d. And there are never too many vegetables, or too much gefilte. Just make sure it's labeled "Kosher for Passover." And pass the Manischewitz, it's going to be a long week.