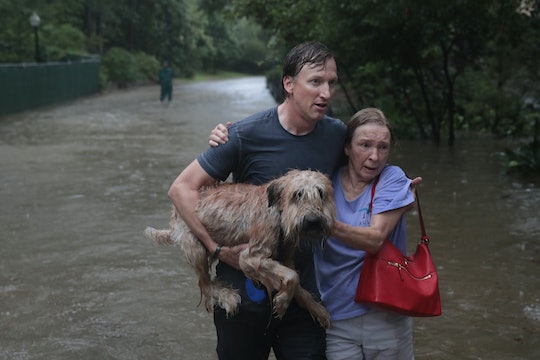 On Friday, Hurricane Harvey made landfall over Rockport, Texas, as a Category 4 storm. Since then, the storm has been downgraded to a tropical storm that has already dumped more than 30 inches of rain over parts of east Texas. On Twitter, the National Weather Service has called the devastation of Hurricane Harvey "unprecedented," with no signs of the catastrophic rainfall and flooding abating any time soon, according to meteorologists. More than 30,000 Texans have been affected by the storm according to FEMA, and they need our help now more than ever. Here are eight local organizations you can donate to after Hurricane Harvey.

While many are quick to text a donation to the American Red Cross, the organization has received criticism for how it appropriates donations to localized disasters. In the immediate aftermath of natural disasters, it's often local organizations that need the funds and resources to get boots on the ground faster more than larger national or international relief organizations like the Red Cross. Additionally, focusing your donations toward local relief efforts allows you to assist very specific populations affected by Hurricane Harvey that may be of most concern to you, including children and families, pets, or the homeless.