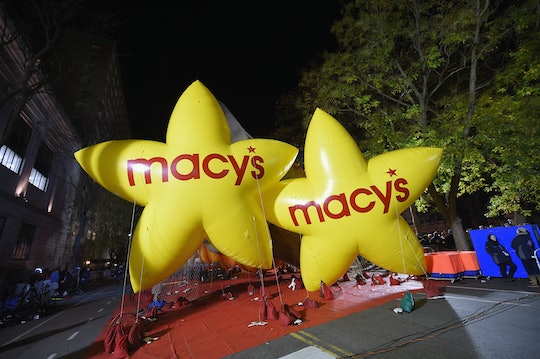 What better lead up to your impending turkey coma than watching the 2015 Macy’s Thanksgiving Day Parade on TV? The parade kicked off at 9 a.m. from 77th Street and Central Park West in New York City, and will finish right in front of Macy’s on 34th Street, which is also the stage where most of the performances will occur. Technically, the floats are the highlight of the parade — and, let’s be honest, they are pretty impressive — but this year’s show also includes over 30 musical performances, including some big names, as well as casts from six Broadway musicals including "Fiddler on the Roof," "Finding Neverland," "The King & I," "On Your Feet!," "Something Rotten!", and a special performance by Cirque du Soleil. Pretty sure that’s something for everyone, right?

The show will also feature a slew of celebrity appearances, lots of behind-the-scenes action, marching bands galore, and a preview of NBC’s upcoming show The Whiz Live. You can watch the three-hour broadcast on your local NBC station, hosted by Today anchors Matt Lauer, Al Roker, and Savannah Guthrie. Don’t have access to NBC on a TV? Fear not: you can livestream the event online at NBC.com, or watch the parade on EarthCam’s stream via their camera at Columbus Circle. How’s that for options?

But if that’s all a bit much for you, here are the performances you’ll probably want to keep an eye out for most: