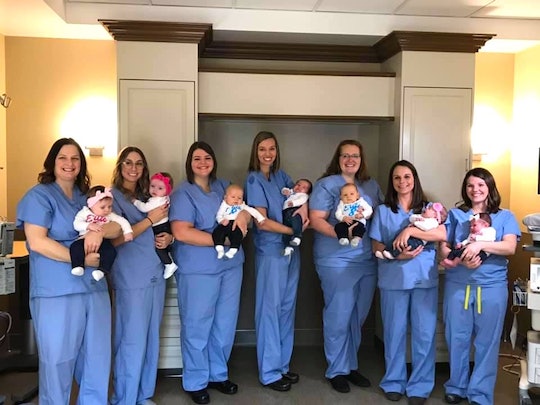 Having a friend go through the woes of pregnancy and early motherhood along with you can certainly make your own pain easier. But how about seven friends? Recently, eight obstetric nurse co-workers gave birth within a few months of each other, and their stories — as well as photos of the babies together — are capturing hearts all over the internet.

The eight women, seven of whom are obstetric nurses and one of whom is an obstetric tech, all work at Anderson Hospital's Pavilion for Women in Maryville, Illinois, as USA Today reported. Back in July, the hospital announced that eight of its employees were pregnant with a Facebook post that went viral. "8 co-workers in Anderson Hospital’s Pavilion for Women are pregnant and due to give birth over the next 4 months," the hospital wrote on Facebook, alongside a photo of the seven nurses posing with their bumps outside the hospital. (The obstetric tech wasn't available for the photo.)

Then, on Jan. 9, the hospital announced that all eight women had delivered their babies by sharing a photo of seven of the eight moms with their babies. (Again, one of the moms was unable to make the photo.) "The Pavilion for Women had their own baby boom going........and it exploded!!!!" the caption read. "We are loving all of our babies! The Elite 8 are here and ready to rule the world!!!!!!!!"

The babies are named Anna, Reese, Logan, Holden, Daniel, Charlotte, Charlotte, (that's right, two Charlottes) and Jewel. The moms dubbed their babies the "Elite 8," and even got them customized onesies to commemorate their first meeting. As seen in photos Anderson Hospital's Pavilion for Women shared on Facebook, seven of the eight moms brought their babies to the hospital, dressed them up in their onesies, and posed for an unbelievably cute video. Pretty sweet to be born with seven built-in BFFs, am I right?

In August, local news outlet KRIS 6 News visited Anderson Hospital to talk with the eight staffers, seven of whom were pregnant at the time. The eighth staff member had already given birth, making her baby the oldest of the Elite 8. "We would tell one person, and then we would slowly find out that somebody else was pregnant, and then another person...," said Sara Grotefendt, an OB Educator. "One of the rolling jokes in the Facebook posts was that we weren't gonna have enough staff for people to take care of our patients. But we have plenty of staff!" she added.

"Who drank the water next?" joked another, with a laugh.

And if you were wondering if the nurses helped each other with their deliveries, the answer is a resounding yes. "Are you guys gonna help each other deliver each other's babies?" the KRIS 6 News anchor asked the group of nurses. "Yeah. It's really exciting. I've delivered both of her other kids," responded Rebecca Eggering, a Nursery RN, pointing to Grotefendt. "And so we're due five days apart, so we're hoping that continues and I can still do the third one, too."

The nurses have not confirmed whether or not they wound up helping each other give birth, but luckily it seems like all the babies and mamas are doing well. Hopefully Anderson Hospital will continue to update followers on the Elite 8.