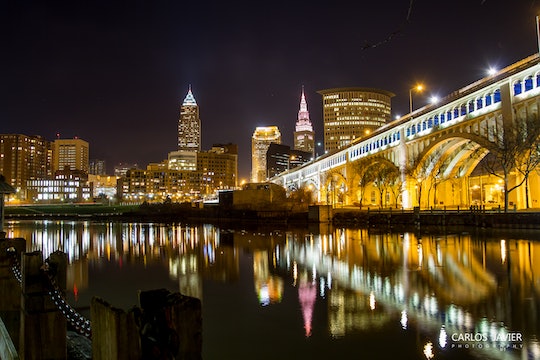 The best part about being raised in Cleveland, Ohio was that I got to experience both city and suburban life. I got to experience the towering buildings and concrete streets while simultaneously getting a taste of life on the slower, simpler side. The worst part about growing up in Cleveland? It can often feel like people have made up their minds about what it's like to be a "Clevelander" without ever visiting. Like any city, it can lay claim to some embarrassing things, such as the nickname "Mistake By The Lake," which likely stems from the decades-ago oil fire on the Cuyahoga River that ran into Lake Erie. But just like an other mid-sized city, Cleveland isn't the sum of its past mistakes. Life in the Cleve boasts an exciting nightlife that's rapidly expanding daily. We've got amazing food. Our sports teams are on the up and up. There's plenty of things to do and see. And C-Town is brimming with culture. Still though, the myths about growing up and living in Cleveland persist.

Cleveland isn't just another Detroit or Buffalo stereotype. Yeah, it's gray and depressing in the winter, but I assume that can be said about lots of other big cities during the long and dreary when it snows nonstop. I might be biased (because I live here and I love it), but most, if not all, of the misconceptions about The Forest City are entirely off-base. At the same time, if the stereotypes about life in Cleveland keep people out, then maybe that's a good thing (more for me to love of the city I love).

Here are some of the biggest misconceptions I've heard — and reasons why they're so totally wrong:

More Like This
Ginger Zee Had A Perfect Response After A Troll Asked Her "Who's Raising Your Kids?"
It's A Beautiful Day In Jenny Slate’s Neighborhood
These Boys Saved Their Dad From Drowning With CPR They Learned From The Sandlot
Your C-Section Scar: Healing & Care Basics