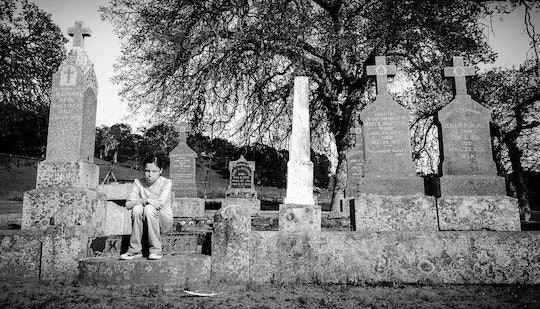 8 Painful, Frustrating Stages Of Trying To Explain Death To Your Children

My first semester of college, I took Introduction to Anthropology. I didn't love it and, as such, I've mostly forgotten everything about the course. But one thing from the first day of class has stuck with me: In highlighting some of the challenges faced by anthropologists, the professor pointed out that it was often extremely difficult to create accurate family records because many tribes have strict taboos against speaking about the dead. I was intrigued by this idea, because it struck me as absolutely heartbreaking. How do you process a loss when you aren't allowed to so much as say the name of a loved one once they're gone?

As the years went by, I realized that this taboo was not unique to the clutch of shrinking Amazonian tribes we had discussed in my Anthro class. Refusal to speak about the dead, while not universal, is common across countries and cultures, including modern American culture. Don't believe me? Who among us hasn't guarded our speech around a grieving widow, parent, or family member, diligently avoiding not only the dead person's name but any subject that might call to mind any hint of their memory? In American society, speaking about the dead isn't an overtly stated taboo, but it's still taboo. And this reticence regarding the deceased extends to a desire to avoid any and all discussion about death and dying.

I'm going to go out on a limb here and assume that death was never a particularly sunny subject. But back in the day, death was part of everyday life. And I don't just mean that people were more used to it because of shorter lifespans, horrible contagious diseases, and high infant and maternal mortality rates, though I'm sure that came into play. But up until relatively recently, death and death rituals took place in the home almost exclusively. Now, most people die in hospitals or nursing homes and most funerary rites take place in a funeral parlor. As a result, an already confusing, sad, and scary part of life has become even more confusing because we have even less insight and understanding of it than did our ancestors.

And if you're reading this article, you probably have another confounding factor that makes the subject of death and dying even more difficult and emotional: You're a parent, and it's up to you to guide your tiny human(s) through all this as well. Children can make life amazing and joyful in ways you never knew possible before they were born, especially if they sleep past 7 a.m. But in times of sorrow, children can be the moldy cherry atop your already craptastic sundae. Here's how...