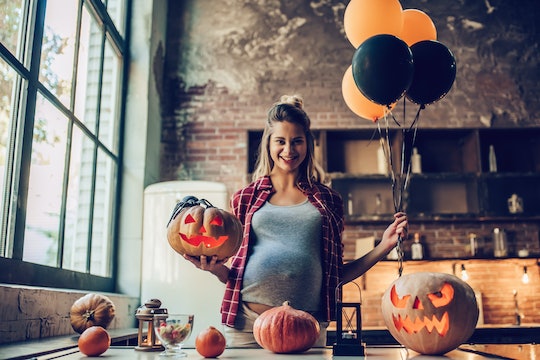 8 Best Halloween Costumes From Party City For Pregnant Women, That Are Bumpin'

Finding a Halloween costume when you're pregnant can be a real drag. Sure, there are plenty of costumes for mamas with babies, but there really aren't a lot of affordable options if that baby is still cooking (unless you want to go the DIY route). Fortunately, you can still find Halloween costumes at Party City for pregnant women, even if they're not exactly labeled as such. Whether you're planning on trick-or-treating with your older kid(s), or have a friend's masquerade party to attend, you've got to got to dress up that bump!

Looking through Party City's selection of Halloween costumes, I loved some of their pop culture references, like this one of Eleven ($35, Party City), who was by far the most memorable character from the addicting Netflix show, Stranger Things. Even if you're rocking a large baby bump, you could still don the Eleven wig and jacket, along with a pink maternity dress, and you'd totally have yourself a more than legit Halloween costume.

So, who cares if the costume you're eyeing isn't specifically made for maternity? You can still have fun in the dress-up department with these clever costumes from Party City! And if there was ever a time to treat yourself to some Halloween candy while you're there, this is it.