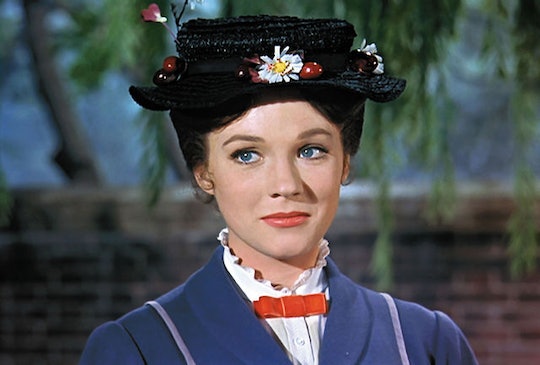 I wasn't one of those kids who obsessively watched Mary Poppins every day. I saw it as a small child, probably more than once. In fact, I seem to remember loving Mary's red-and-white dress from the animated sequence in the chalk painting and wishing that whenever I went on a carousel the horses would take off on their own for a charming ride through the countryside. But the first actual memory I have of watching Mary Poppins was when I was about 12. My brother and I were sleeping over at my uncles' house, and we joked that the whole film was about a grifter who fed her charges some combination of psychedelic drugs to make them think they were going on magical journeys on the rooftops of London. (We cleverly renamed it Mary Poppin' Pills.) I mean... it's as valid an interpretation as any other I've heard, including this one about how Mary Poppins was Burt's nanny.

But sometime a couple years ago, my husband realized he had never seen it and that was probably an unfortunate omission. After all, it won five out of the 13 Academy Awards for which it was nominated, including Best Actress for the transcendent and flawless Julie Andrews. So we decided, yes, Mary Poppins was a thing that had to happen for us, even if our son wasn't interested. (He was two at the time and wasn't quite in a place where he was ready to sit for a feature-length film.)

Guys. This movie is awesome. It really is. It's not just cool "for a kids movie." It's a straight-up good movie. (This video by Nick Tierce breaks down some great reasons as to why, though I do have some minor quibbles with his assessment of Mrs. Banks.) It didn't win Best Picture (it lost to My Fair Lady, which it should have, because My Fair Lady is an incredible movie, though My Fair Lady definitely should have lost to Dr. Strangelove; 1964 was apparently an awesome year for movies), but it absolutely earned the nomination it received.

Now that my son is four and is really into movies (he hopes Santa brings him more DVDs) and my 17-month-old daughter is super-crazy into musicals (she will dance to any sound that even slightly resembles a tune), I cannot wait to show them Mary Poppins on our next weekly movie night. (That's right, the Kenneys have a weekly family movie night. Because we're adorable.) Here are 8 reasons it will be awesome.