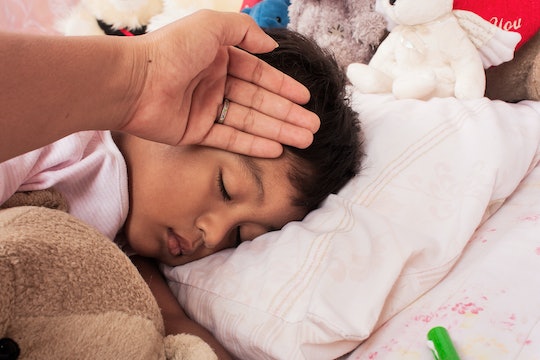 Almost every parent dreads their child coming down with the "stomach flu" — the catch-all name for a variety of conditions causing diarrhea, nausea, and vomiting. This condition is formally known as gastroenteritis and is actually not related to the influenza virus at all, but is, instead, caused by a variety of viruses, bacteria, or parasites. And while it's not all that fun to think about, you need to know the signs your child has a stomach bug so you can help them can get over it as soon as humanly possible.

For better or worse, and according to the American Academy of Family Physicians, if your child has gastroenteritis you will probably know it right away. Why? Well, because it generally causes a whole lot of diarrhea. According to the Cleveland Clinic, other signs of a stomach bug include vomiting and a loss of appetite. BabyCenter warns parents that gastroenteritis can cause dehydration too, which can be serious for babies and young children and result in hospitalization. So it's important to know what to look for and to frequently offer your child small amounts of fluids like water, an electrolyte replacement drink like pedialyte, or juice if they throw up or have diarrhea.

While gastroenteritis can be dangerous, if parents know what to look for they can generally manage their child's symptoms at home and let it run its course. Mayo Clinic does advise parents to call their child's doctor if they have symptoms of gastroenteritis with a fever higher than 102 degrees, seem unusually irritable or in pain, show signs of dehydration, have blood in their stool, or their vomiting lasts more than a few hours in babies.