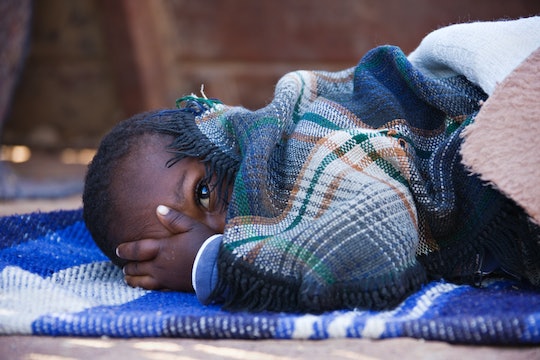 8 Signs Your Kid Is Definitely Hiding Something From You

Children are notoriously sneaky; be it by grabbing an extra piece of candy after you've told them not to, or pretending to have completed a list of chores when, in fact, there's a hidden pile of things stuffed in the closet. Deception may not always be easy to spot — especially if they're as clever as my two kids — but it's important to notice and become familiar with at least a few of the signs your kid is hiding something from you, before that thing they're hiding becomes dangerous (or, you know, pretty damn messy).

Once upon a time I made the decision to give my 5-year-old daughter a small laptop to play games on. At such a relatively young age, she needed a lot of help getting her new laptop set up and was never allowed to play outside of our presence. However, and as I've so aptly mentioned previously, the young ones know how to lie or hide or simply get around rules (even in plain sight). It wasn't until I glanced over and noticed a guilty expression on my daughter's face that I felt the need to I rush over to her and assess the situation. What I saw, well, I wasn't prepared for. My sweet angel had somehow figured out where the "chat" button was within the game she had been playing, and had been communicating with someone. While she didn't know how to spell a lot of words at that age, I immediately recognized "sexy," and yes, I hyperventilated a little.

That was the end of the laptop for many, many years. Drastic? Maybe, but this kind of thing can happen so fast, and it's hard to know when your kid has been given enough room (or simply just found a way) to cross a boundary they shouldn't have. Maybe my daughter knew better, and maybe she didn't, but her safety is my priority so bye-bye laptop and bye-bye any assumptions that my kid is too sweet to hide things from me.

After lengthy discussions about internet safety and why mommy was hyperventilating, my daughter seemingly learned her lesson (for the time being). With all the other things I've discovered since (and there's a lot), here are some of the signs your sneaky kid is hiding something from you. Live and learn by my mistakes, right? Ugh.