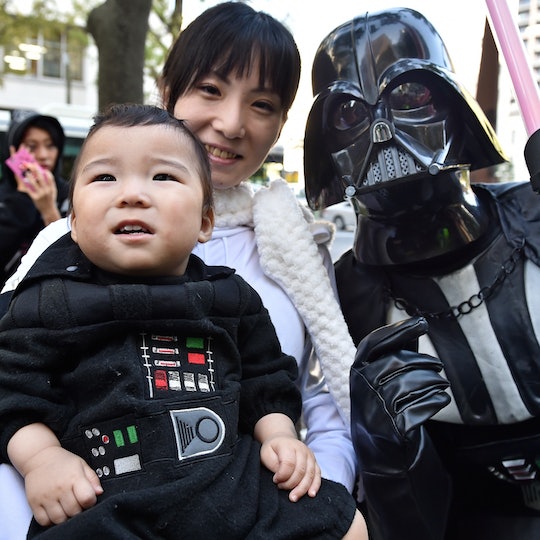 8 Stages Of Preparing Your Kids For 'Star Wars: The Force Awakens' Because They Don't Understand The Importance Of This Moment (Yet)

Like many a child born in the 1980s, I was raised on Star Wars from my earliest years. Princess Leia was my idol. Han Solo was my dream man/is still my dream man/I like him because he's a scoundrel. My Yoda figurine sat on my bedside table to keep bad dreams away. As a wave of late '70s nostalgia permeated pop culture in the mid-to-late-90s, the Star Wars franchise (which had, of course, always been popular) became even more popular, and my enthusiasm increased correspondingly. Between the ages of 11 and 14, most of my birthday and Christmas gifts were Star Wars related. I wrote fan fiction when I was in 6th grade (if anyone wants to know about Han Solo's long-lost younger sister, go ahead and give me a call... actually please don't, just admitting this is deeply humiliating). When I was a sophomore in high school, something magical happened: a new Star Wars  movie was released. It was a miracle.

There had been whispers for a long time about George Lucas releasing prequels, but on May 19, 1999, almost exactly 22 years to the day A New Hope was first released, The Phantom Menace hit the big screen. We met Darth Vader as a seven year old, as well as Luke and Leia's mom, who was then a tweenage queen. We saw Obi-Wan Kenobi when he was a hot Ewan McGregor (*praise hands*). We ooo-ed and ahhh-ed Darth Maul's sweet lightsaber staff, even as it struck down the Liam Neesons. We were so excited. But then something happened... we left the theater.

What followed is what I have come to call The Phantom Menace effect: The further you get from the screen, the more you realize that your in-the-moment enjoyment was based exclusively on built-up excitement that had finally had its release. So, as the credits roll, you're like, "THAT WAS AWESOME!" as you walk down the aisle, you're like, "OK, Jar Jar Binks was pretty irritating and also sort of racist, but it was still a great movie." When you're in the lobby you're like, "And actually, that Jake Lloyd kid was not a very good actor... and Natalie Portman was pretty wooden." By the time you're in the parking lot, you're like, "Dafuq did I just watch?!" And yet we still got excited when Attack of the Clones came out in 2002, and then again with Revenge of the Sith in 2005. That's how much excitement we had banked in the 20+ years of waiting: Even after Jar Jar Binks and suffering through dialogue that legitimately could have sprung from the pages of my 11-year-old fan fiction, we still paid money to see those monstrosities.

In 2012, Lucas sold Lucasfilm to Disney, which would grant the House of Mouse the right to do with Star Wars whatever it pleased, including making new movies. At first, nerds all groaned and bemoaned the death of their beloved franchise. But then we slowly realized something: Our beloved franchise died years ago. Lucas, like Medea, had killed his darlings (unlike Medea, he had done so unintentionally). What this sale to Disney signified was, dare I say it, a new hope, because we had literally nothing left to lose.

It's sort of like J.J. Abrams, who directed The Force Awakens, is saying to us, "Guess what, everyone! You know your beloved childhood dog, Mitzy, who died back in 2005? I'm going to bring her back to life, and she's going to be just as amazing as she was in her best years!" That leaves bitter, skeptical, thrice-burnt fans staring back at him with these two options before them: Either J.J. Abrams is a charlatan, which is annoying but doesn't make our dog any more dead so we have nothing to lose, or J.J. Abrams is a powerful wizard and we're going to sob like infants when Mitzy comes running back into our arms. Even if we have hope only to have it dashed, that is nothing new. We know that feeling. We've already endured it.

Ladies and gentlemen, fellow geeks, I choose to hope. Even if I am disappointed in the end, the act of hoping now is making me happy. Because on top of being excited for me, I am excited to use The Force Awakens as an opportunity to introduce Star Wars to my children. I've been waiting until they were old enough to, you know, appreciate on a level I can approve of, and I believe my young padawans are ready. Here's how you, too, can prepare your children for Star Wars: The Force Awakens.

More Like This
'Virgin River' Fans Can't Stop Cracking Jokes About How Charmaine Is *Still* Pregnant
What Parents Need To Know About Hulu's Predator Prequel Prey
10 Cozy, Romantic, & Drama-Filled Shows To Watch If You Love 'Virgin River'
Drake Shared A Photo Of His New Face Tattoo & It's A Sweet Tribute To His Mom