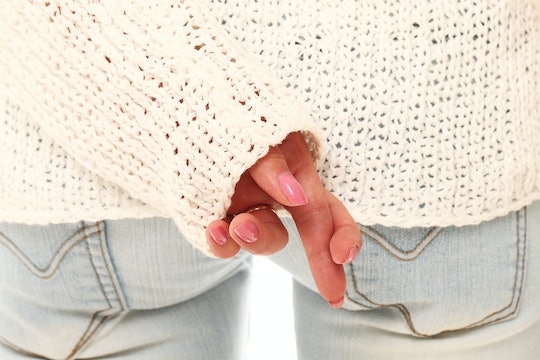 8 Subtle Signs Someone Is Lying To You

A little white lie or stretch of the truth can happen from time to time, whether intentional or accidental. "How much do you like my blouse?" "Love it," as an example, is something relatively consequence-free and your intentions are usually good. Although most people aren't setting out to intentionally mislead or blatantly lie to everyone they come in contact with, chances are you'll be lied to at one point or another. It's often fairly simple to deduce obvious signs of lying, such as outlandish stories that frequently change, but there can also be subtle signs someone is lying to you.

Lying is much more common than anyone would probably like to admit. In fact, a University of Massachusetts Amherst researcher conducted a study on lying and concluded that 60 percent of people lied at least once in a 10 minute conversation, averaging two to three lies in total. Unfortunately, the real world isn't a fairy tale where liars' noses grow. That's why you have to look out for the signs that someone is lying to you.

Of course, that becomes tough too if it leads to an over analysis. After all, just because you fidget or swallow hard during a conversation doesn't mean you're not telling the truth. But if you have a strong sense that someone if lying, keep an eye out for these eight signs that someone is skipping over the truth.