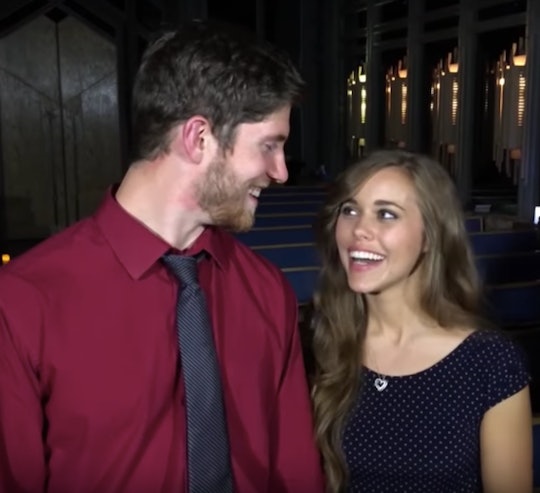 There are a lot of members of the Duggar family to keep tabs on these days. Between all the marriages and courtships and pregnancies, the family seems to be expanding by the second. And even though he's been a fixture in the family for years now, these surprising facts about Ben Seewald, Jessa Duggar's husband, could actually be news to even the biggest Duggar fans out there.

As most Duggar fans are aware, Seewald married Duggar back in 2014, according to E! News, and the two have been fixtures on the Duggars' TLC shows, 19 Kids & Counting, as well as the spinoff, Counting On. And since the happy couple got married, they've only continued to amass fans and followers through their appearances on Counting On and regular social media updates about their family with their two sons — Spurgeon Elliot, 2, and Henry Wilberforce, 1, — as well. But just because the husband and father of two is a fairly public figure doesn't mean that there aren't some lesser known facts about him.

Of course, that's part of what makes keeping up with this big family so much fun. There's always something going on, which means that there's also a lot that can slide through the cracks.

1. He's Open About His Political Beliefs

As fans of the Duggars know to be true, the family tends to lean pretty far to the right, politically speaking. Many members of the family have made their anti-choice stance on abortion abundantly clear, including Seewald. On the Seewald Family Blog, Seewald wrote:

Abortion is murder, and it is tolerated today in the nation which I live. I will not stand by and do nothing while unborn human beings are daily being brutally sacrificed on the bloody alter of human convenience

On the other hand, though, Seewald has also posted his support of the NFL players kneeling during the National Anthem on Twitter. "There is a reason they kneel rather than sit (which is how the protest began)," he wrote. "Look, all I'm saying is do some research, think about it from their perspective." For conservatives, supporting the NFL protests isn't exactly a popular opinion, so Seewald definitely stands out.

2. He Admired Jessa From Afar At First

Because the two didn't get married until 2014, and the Duggars have been on television since 2008, it only makes sense that Seewald would have seen his future wife on 19 Kids & Counting before he actually met her in person, as In Touch Weekly reported. More so, he wasn't let down when he finally met her in person. According to In Touch Weekyly, Seewald explained in the book, Growing Up Duggar, "Once we met, I witnessed firsthand that she was very caring to her mother and helpful with her younger siblings."

The two are obviously meant to be.

OK, OK, so maybe a bit of clarification is needed. Seewald isn't a rap enthusiast, rather a Christian rap enthusiast. In an episode of Counting On, as seen above, Seewald hangs out with some of his Christian rapper friends in the recording studio. Additionally, Seewald has shared images of the music he has on Spotify, which was mostly Christian hip-hop or rap.

As followers of the cute family know, the Seewalds already have two sons, 2-year-old Spurgeon and 1-year-old Henry, and while it might seem like they have their hands full, they also might want to expand their families. According to People, in a clip for the newest season of Counting On, Ben asked Jessa, "What if we have another kid by the end of four years?"

5. He's Totally Grateful To His Wife

Based on her appearances on Counting On, it's clear that Duggar is a very hands-on mom, and Seewald is definitely grateful for that. In a Mother's Day post from 2017, Seewald wholeheartedly wrote:

My dearest Jessa, Where do I start? As I sit here, I try to think of what I can say to express my deep love and appreciation for you. Can mere words accomplish such a feat? Will a short note convey to you my admiration? I am blessed!

6. He's Open To Talking About Racism

As made clear in Seewald's post about the NFL players' protests, and his sit-down with Christian rapper Flame, Seewald is very passionate about racism in America. In another Instagram post, the dad of two wrote:

Racism is an attitude that is diametrically opposed to Christianity. Racism views others with prejudice based on outward appearance.

As odd as it may sound, Seewald's posts about protests and racism weren't even the most controversial Instagrams from the Duggar family fixture. A photo of a deer by the road got a lot of people talking, too. He simply wrote:

One day, there will be no more predators and victims in the animal world. There will be no reason for fear. I look forward to when Christ restores all things in the New Heaven and Earth. Are you a citizen of the kingdom?

While this might not seem like much, fans had a lot to say. Comments like, "One day there will be no predators and victims in the animal world?? That's nuts. How would carnivores eat?" and "Families have to eat. That'd been a dead deer if I would've seen it!" made it clear that some of his fan base wasn't too happy with the post.

8. He Could Be A Preacher

It's always been somewhat unclear what many members of the Duggar family actually do for a living. Many reports have indicated that family members just work for their dad, Jim Bob Duggar and his various real estate and construction holdings. But since Seewald isn't technically a Duggar, his actual job title is murky, but SheKnows reported that he's a preacher.

While Seewald might have been a part of the Duggar family for years now, he still sets himself apart in a few ways.