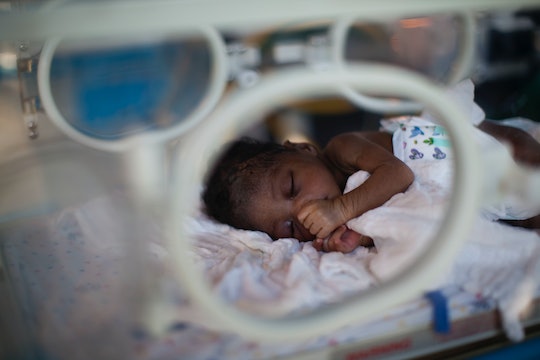 8 Surprising Reasons Babies Get Sent To The NICU

When I was pregnant with my first child, I thought only seriously sick babies were sent to the neonatal intensive care unit (NICU). On television and in movies, the NICU is usually reserved for babies who are born pre-maturely or need tubes to breathe and eat. But when my daughter was born, and had to spend a few days in the NICU before she could safely come home from the hospital, I learned that there are a few surprising — and not uncommon — reasons why a baby might go to the NICU.

Per the March of Dimes, babies who are born early or who have a variety of medical conditions might require specialty medical care after they are born. According to the same site, the hospital unit charged with providing this care is called the neonatal intensive care unit (NICU) or special care nursery. Specially-trained doctors, nurses, and therapists will care for newborns until they are ready to be discharged home or to a pediatric unit. Some reasons babies might need extra TLC include being born too small or too early in their gestational development to eat or breathe on their own. Surprisingly, babies who are bigger than average at birth might also be sent to the NICU, especially if their mom had gestational diabetes or they have low blood sugar. Other reasons a baby might be sent to the NICU include not being able to safely ride in a car seat, according to the Children's Hospital of Philadelphia, or if they aren't feeding well.

Having a baby in the NICU can be frightening and stressful, but it's the best place for babies to receive the care they need to head home with you from the hospital. To learn more about why your baby might get sent to the NICU, read on:

More Like This
Is It Good For Babies To Be Exposed To Germs? It’s Complicated
Can You Give A Sleeping Baby A Breathing Treatment? Experts Explain
Here’s What To Do If Your Baby’s Nose Bleeds After Suctioning
Can You Burp A Baby Too Hard? A Pediatrician Shares Tips For Gassy Tummies