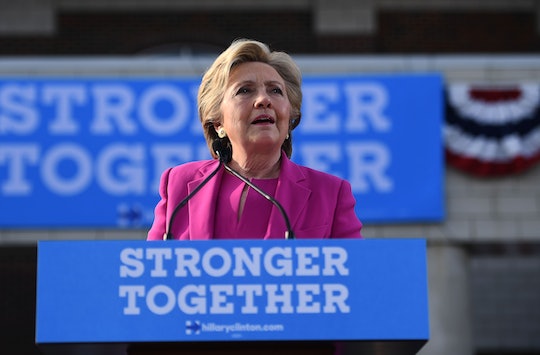 8 Things Hillary Clinton Has Done For Women, According To Her Emails

We've heard a lot about all the "horrible" things buried deep in Hillary Clinton's private email server. According to many people who haven't thoroughly perused the WikiLeaks database, Clinton is a terrible, horrible, no good, very bad politician who's never done anything positive for anyone but herself. Well, simply put: That's not true — not in the slightest. Clinton has talked a lot about women's issues, and now we know she walks the walk, too. Her emails show that she actually did quite a lot for women during her years as Secretary of State.

Not only do the emails show that Clinton pushed women's empowerment in her policies and projects, but they also reveal Clinton's nature when it comes to women and women's rights. The emails I browsed that involved women showed Clinton to be a respectful, supportive, and dedicated representative and advocate for women. I couldn't include every instance where Clinton said positive things to another woman, but language and behavior certainly count when we as women try to decide who will be our biggest advocate. But beyond language and behavior are real actions that help women, which we know she took during her time as Secretary of State. Following are eight instances in which Clinton's emails reveal her actions:

After meeting with farmers in woman's cooperative group in Tanzania, this was written about Clinton.

Secretary of State Hillary Clinton is spearheading a quiet revolution in progressive foreign policy by making the empowerment of women and advancement of their rights a cornerstone of U.S. foreign policy... Secretary Clinton has been the main mover behind this agenda, and her well-known personal interest in empowering women internationally has propelled it forward. For instance, Saudi women activists called on Secretary Clinton to support their right-to-drive campaign due to her intense personal interest in women's rights.

Do you recall Noon i Ali(?), the ten year. old Yemeni girl who got herself divorced? I met her at the Glamour awards last year. There was a CNN story last few days about how unhappy she is, still living at home, not attending school and quite angry that her life is not better. Is there any way we can help her? Could we get her to the US for counselling (sic) and education?

This is wonderful news and such a fitting memorial to Booke (sic).. Also. I would like to talk w you about your ideas of what I can/should be doing. Could I call in the next few days? What times are best for you? H

Dear Laura, I am so proud and happy for you and can't wait to give you a big hug! I'm copying Lona to ask that she set up a time for you to come see me. All of "Hillaryland" will miss you but you'll always be part of us. H

Clinton's aides received the following email, and responded saying Clinton would like to support the campaign.

The campaign is called "Because I Am A Girl."...Plan International needs to convince the UN that educating girls in developing countries must be a priority... Our goal is to inspire a global movement starting with asking at least one million people to "raise their hand" if they believe every girl deserves an education.

Clinton was sent an article about the importance of men in women's empowerment, and her response shows her understanding of feminism and the work it will take to get equal rights. The subject was "TO EMPOWER WOMEN, WE HAVE TO FIND BETTER WAYS TO VALIDATE MEN."

I love this piece because it is important and necessary to begin focussing on the disconnect btw and modern society. I think it's one of the reasons behind fundamentalism where roles are clear.

When She Praised Other Countries For Doing Right By Women

Clinton was forced to rest for some reason, perhaps a sickness, but she sounded supportive of the fact that the United Arab Emirates ruled to require at least one woman on each board. She also had her aides attend women's empowerment sessions when she couldn't. Her aide said this:

I made it to Tunisia where the women's empowerment session went very well. As for the UAE, they are getting kudos for their decision to place women in high positions, and they are so way ahead of much of the world on this.

When She Was Instrumental In Creating An International Family Planning Budget

This was written about Clinton after more funding was allocated for international family planning:

The women of the world have true friends in Secretary of State Hillary Rodham Clinton and the Obama administration. After years of inadequate funding during the previous administration... an increase in international family planning is a critical step forward in demonstrating our nation's renewed commitment to ensuring that women worldwide have access to safe and effective reproductive health care.

Clinton's emails aren't only food orders and silly jokes — in many of them she was discussing the crucial work she was doing to help women and girls. Clinton doesn't just talk the talk, and her emails actually prove it.