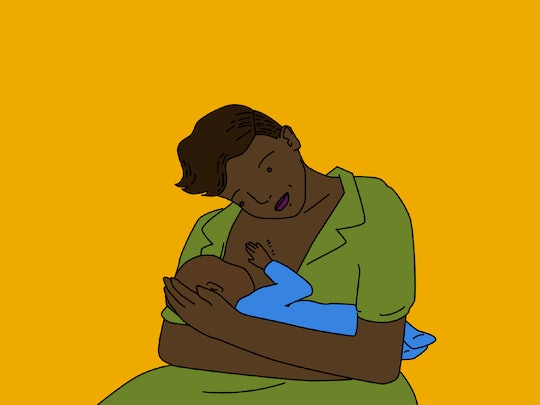 8 Things You'll Hear In Public When You Breastfeed In Public

"Breastfeeding" is a word that, on its own, without context, can elicit some very powerful emotions. It's the cornerstone of trigger words in The Mommy Wars. Some parents feel as though society is side-eyeing them for not nursing their babies; Others feel that they have not been given the support they need to have a successful breastfeeding relationship with their baby and they're struggling as a result; Others still feel defiantly proud of their choice in how to feed their child because they've had so many naysayers tell them they can't or shouldn't. But for the overwhelming majority of parents, our attitude toward breastfeeding is either "uh, this is just how I feed my baby" or, if they don't breastfeed, their response is just "hey, you do you, friend!" Because the Mommy Wars are bullsh*t and most of us are way, way too busy with our own stuff to give a crap about how anyone else parents.

Of course, there are those people out there, parents and non-parents, with Very Important Opinions. And whenever someone has a Very Important Opinion, they want you to hear about it. So for those of us who breastfeed in public, we recognize that every time we do so someone might have something obnoxious to say about it.

I must confess that in breastfeeding two kids — one to 17 months and the other 18 months and counting — I've never had anyone say anything negative, either to my face or muttered/whispered/passive-aggressively groused about. And I've nursed everywhere, uncovered, because I give none of the f**ks. 99% of the time no one says anything about it. When someone does have something to say, it's usually quite nice. Now, I am not necessarily representative of all breastfeeding parents: I know lots of women who have been harassed on the regular for breastfeeding their little ones as discreetly as could be. This could be a combination of where I live (a pretty liberal, relatively breastfeeding friendly part of the country), luck, and a fiery look in my eye that warns would be interlopers, "Go ahead. I dare you, because I have at least seven really witty retorts to whatever garbage you have to say."

Between personal experience and stories I've heard from loved ones, I think I am qualified to share the things you will hear if you nurse in public, if you hear anything, which you probably won't (thank goodness).