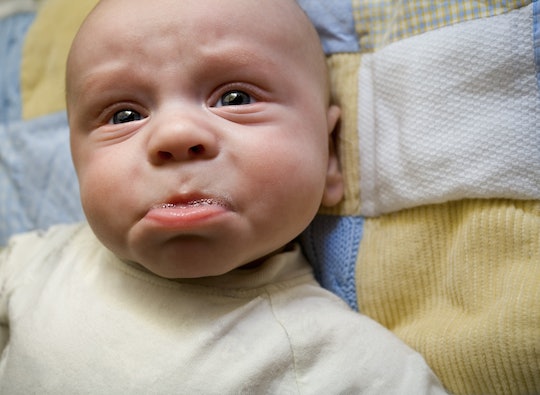 When Your Baby Will Catch A Serious Case Of FOMO

You'd think babies were too young to catch a case of that now-ubiquitous fear of missing out (or FOMO, to those of you living under a rock for the last several years). For a while, they are oblivious to what's going on around them, in part because they can't see past their own adorable feet. However, much sooner than you think could be possible at their age, your baby will catch a serious case of FOMO. Sorry, dear reader, but it's only the beginning.

In the case of my daughter, FOMO manifested itself early — like at only 5 weeks old, you guys — when we realized that she wouldn't "nap on the go" if her life depended on it. We'd take her out for a walk in her bassinet stroller and, even when covering the opening with a blanket, she'd still be staring at her surroundings, mesmerized at the sparkles coming through the hazy light. That whole stroller lulling the baby to sleep thing? Yeah, not a chance. This kid knew from the very beginning that if the light's on, she should be ready to party.

Now her FOMO has expanded into different spheres. She wants to eat what anyone else is eating, spots a playground and has to be there, and needs the exact toy some other kid has. Navigating baby FOMO is tough and requires extra patience. Luckily, they'll grow out of it in a few years, right? (Just lie to me.)