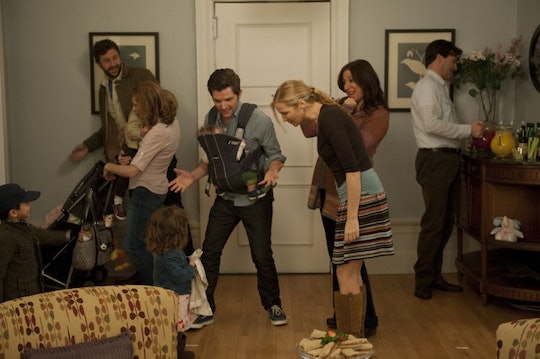 The transition from life “before kids” to life “after kids” is dramatic, to say the least. You may have initially assumed that your new baby would just slide right into your life, without you missing a beat, allowing you to continue living your awesome, full life, just with the addition of a sweet little pal to be along for the ride (except when that pal was sleeping, which would be for 12 hours every night, hours you would fill with friends, sex, creative pursuits, and sleep of your own, easy). Much like the token purse chihuahua, you’d just tote baby along to your favorite hotspots and bask in the “ooohs” and “awwws” of onlookers. This, at least, was the plan.

Once you actually have a kid, reality quickly sets in that your world now revolves around baby, and not vice versa. Though having children will undoubtedly impact every possible aspect of your existence, the social life seems to be a particularly vulnerable realm: Unlike, say, work and sleep, spending time with your friends after you have a baby feels slightly more…expendable. And when you suddenly never have enough time for anything, your social life is often the first thing on the schedule cutting room floor

To be clear, this isn’t just a shocking transition for people who went out all time before they had kids. I can’t claim to have been a party animal before I became a parent. My homebody tendencies mean that I’ve always preferred the comforts of a night in (Netflix and wine) over heels, cabs, and making out with strangers. However, I did enjoy the freedom and spontaneity that my pre-kid life afforded: Tailgating with friends before a big game, meeting up for after-work drinks, or having game nights with girlfriends were all commonplace on my social events calendar. Since having kids, that aforementioned social life has definitely undergone an... evolution.

This change isn’t necessarily a terrible thing. In some ways, having a baby — and thus less time — makes you look more carefully at the social things you were doing, and really think about which ones matter most to you. But that distinction can be hard to hold onto when you’re in the thick of the baby days, unable to find an hour for a shower, let alone a whole morning to go to brunch with your crew.

Here are a few of the ways your social life will probably change when you have kids: