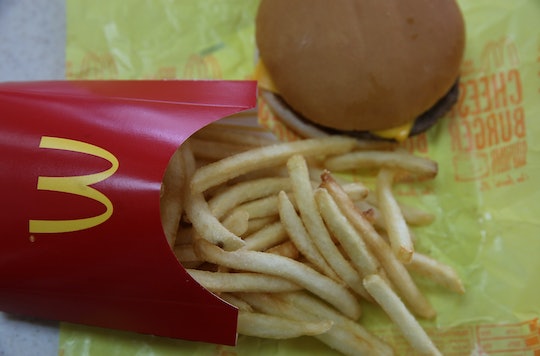 8-Year-Old Drives Himself & His Sister To Get Burgers

Bad news, parents: you can never sleep again. Well, at the very least, you'll be nervous about it, after learning that an 8-year-old drove his sister to get a cheeseburger at McDonald's earlier this week. Some kids are a little too smart, am I right? Jacob Koehler, a police officer from the Ohio village of East Palestine, told Cleveland's Fox 8 that the kids' father had gone to bed early on Sunday after working all day, and their mother was on the couch with them when she fell asleep. That's when the boy and his sister, age 4, decided it was burger time.

After standing on his tip-toes to snag the keys to his father's van, the boy drove a mile and a half to McDonald's, passing through several intersections, and crossing over railroad tracks and a river. Koehler told the Morning Journal that after receiving multiple reports from witnesses who spotted the child driving just after 8:00 p.m., he expected to see some damage to mailboxes and the like, but the boy drove perfectly, stopping at red lights and obeying all traffic laws. After making it to McDonald's, he pulled up to the drive-through window and placed his order of a cheeseburger, chicken nuggets and fries, prepared to pay with his piggy bank money.

Employees reportedly assumed they were being pranked when the boy pulled up to the window, Koehler told local station WKBN. When he arrived at the scene, the parked van was surrounded by adults and the boy was crying, perhaps worried that he was in trouble. Koehler said the kids had already eaten breakfast, lunch, and dinner that day, but the boy told him that he and his sister "really wanted a cheeseburger," so he looked up some YouTube videos on how to drive. Koehler noted that the van didn't have power steering, which meant that turning the wheel required serious effort.

The children were picked up at the police station by their parents, and no charges were filed, which is reasonable, considering the boy didn't cause any damage and the parents were only guilty of being tired. They've clearly raised a good kid, considering he was clever enough to do his research, and thoughtful enough to let his parents get some rest. Before judging, ask yourself, "Have I ever explicitly told my children that it's illegal for them to drive?" I know I haven't. I have an 8-year-old son myself, and between Mario Kart and YouTube Kids, he apparently has all the tools he needs to pull this off. So what's the lesson here? Koehler told the Morning Journal it's that with today's technology, "kids will learn how to do anything and everything." I say it's that kids have no common sense, and parenting is a terrifying experience from beginning to end.