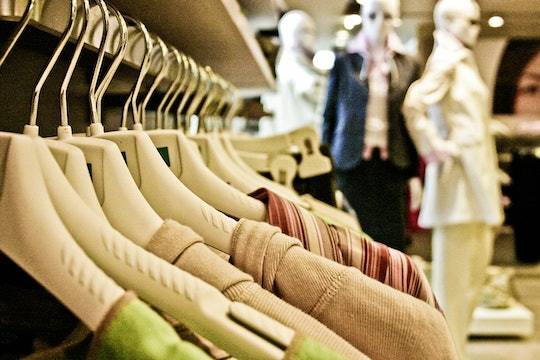 8-Year-Old Makes a Brilliant Case For Not Gendering Clothing, & Retailers Are Listening

It's not the first time someone has pointed it out. Boys receive far different messages from the world about who, and what, they should, and are allowed, to be. It's the same tired old trope. Girls need to be pretty and worry about glitter and unicorns, while boys are encouraged to explore the world. But in a recent viral video, an 8-year-old makes a brilliant case for not gendering clothing — a practice she calls both "unfair" and "wrong."

Someone give her mama a high five.

“It’s unfair, because everyone thinks that girls should just be pretty and boys should just be adventurous,” Daisy Edmonds tells her mom in the video, according to TODAY. “I think that is wrong. Why should boys and girls clothes even be separated, because we’re just as good as each other.”

It's a powerful call from a little girl dressed in her karate uniform demanding to be seen by businesses and marketers as a person, not just some vapid vessel biding her time until someone walks by to tell her how pretty she is. Our girls are far more complicated than that. They always have been. The only difference is now we're giving our girls the tools and skills they need to demand better.

Later in the video Daisy, a little giddy, takes the boy's clothes that advertise "hero" and "adventure" and hangs them in the girls' section. Go girl.

This should also serve as a warning to retailers that, as this generation of girls is growing up with different expectations from not just the choices available, but the shopping experience overall, Daisy is helping to usher in a major shift in how retailers sell fashion in the years ahead to meet the demands of their changing customer base.

Parents and people all over the world have been paying more attention to gendering of clothing and the expectations it's setting for children.

Both parents and kids like Daisy are fed up. The good news is that brands aimed at offering a selection of gender neutral clothing are launching regularly now.

Emma McIlroy is a designer from Portland who launched Wildfang, a line of clothing she describes as "tomboy" with plenty of choices for men and women. She told Oregon Live she predicts that, in the next 10 years, there won't be sections to shop for "women's" clothing or "men's" clothing. Instead, she thinks stores will just be a big offering of fashion for everyone.

"They're not going to be merchandized by men's and women's," she said.

And unisex isn't just a feminism thing for little girls like Daisy, high profile men like Jaden Smith and even Kanye West are venturing into embracing "women's" clothing. Smith made a big statement when he recently rocked a skirt in a Louis Vuitton ad campaign, according to E! News.

Daisy, with all of her fierce young feminism, represents the future of fashion retailing, and we should all take note. Those silly hyper-feminine and sexist clothes for little girls are tired, and so are the girls who are expected to wear them.