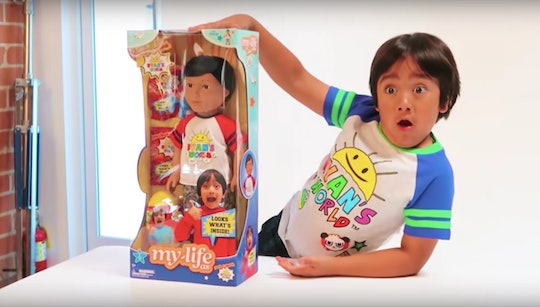 The highest paid influencer on YouTube isn't a beauty vlogger or comedic commentator. Rather it's an elementary school student with 23.2 million subscribers who tops this year's list of high earners. Ryan Kaji is an 8-year-old YouTube influencer who earned $26 million in 2019 to become the platform's highest-paid star, according to Forbes. While only 8, Kaji is a YouTube veteran, having gotten his start with unboxing videos at the age of 3.

According to Forbes' list of The Highest-Paid YouTube Stars of 2019, Kaji pulled in $26 million in pretax income from advertisements, sponsored content, merchandise sales, and more from June 1, 2018 to June 1, 2019. With the help of his parents, Kaji runs the popular YouTube channel Ryan's World, which was known as Ryan's ToysReview up until October. Although Kaji built his YouTube presence around unboxing videos, videos on his channel now see him competing in challenges, conducting science experiments, making educational videos, and unboxing toys and opening gifts.

While Kaji has been on YouTube since March 2015, Business Insider has reported that his channel's popularity didn't really take off until July of that same year when a video of Kaji unboxing more than a 100 toys related to Disney's Cars movie franchise went viral. That video now has more than a billion views.

Roughly four and a half years later, Kaji's videos continue to garner a high-number of viewers. For example, a video of Kaji and his sisters opening Christmas presents that was posted Dec. 27 has since garnered more than 1.5 million views. And video posted Sunday that shows how to make a cardboard ball launcher at home has more than 1.1 million views.

With an estimated $26 million in earnings, Forbes reported that Kaji beat out YouTube's other top-earners, including the five 30-something-year-olds who pulled in $20 million running the channel Dude Perfect and 5-year-old Anastasia Radzinskaya who earned $18 million with Like Nastya. Other high-earners include Rhett McLaughlin and Link Neal of Good Mythical Morning with $17.5 million and makeup artist Jeffree Star with an estimated $17 million.

But just where is Kaji's income coming from? According to Business Insider, the young YouTube star has partnerships and branded products with Colgate, Nickelodeon, Bonkers Toys, Roku, and Walmart. Additionally, his products can be found at major retailers like Target and Amazon. In fact, this is Kaji's second year at the top of Forbes' list of YouTube's highest-earning stars. In 2018, the then 7-year-old was reported to have made $22 million. So, clearly, this kid (and his parents) know a thing or two about this industry.