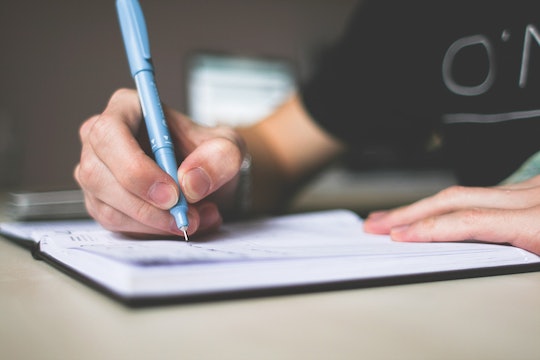 Somewhere in Indiana right now, there's a middle school gym teacher who probably wishes they could crawl under a rock. According to Indianapolis' NBC affiliate, WTHR, students were assigned a worksheet in which they were asked to calculate their body mass index, an outdated model meant to predict an unhealthy weight, and one kid wasn't having it. One eighth grader's BMI essay has gone viral, and if she doesn't get an A in gym, she should at least get extra marks in Self Esteem 101 and A.P. Sticking it to the Man.

BMI is calculated by dividing a patient's weight in kilograms by the square of their height in meters. While the term "Body Mass Index" was coined in 1972, according to the Oxford Journals, the premise, originally called the Quetelet Index, was developed in 1832 by Adolphe Quetelet, a Belgian mathematician, astronomer, and statistician. Astute readers will note that, not only was Quetelet not a doctor, but 1832 was, shall we say, not the height of medical knowledge. For reference, it wasn't until 14 years later that Dr. Ignaz Semmelweis (an actual doctor) theorized that hand washing could prevent the spread of disease. Even the National Institutes of Health (which still offers a BMI calculator on its website) acknowledged that BMI "may overestimate body fat in athletes and others who have a muscular build" or "underestimate body fat in older persons and others who have lost muscle." In other words, BMI is a bunch of BS.

The student's response to the assignment, which was shared on Facebook by a family friend, begins by pointing out the flawed logic that a higher BMI is a predictor of heart disease and diabetes, giving the example of an athletic woman with a healthy diet who is 5-foot-6 and weighs 190 pounds. By the BMI's standards, this woman would be considered obese, when in fact 80 percent of her body weight is pure muscle. Treating fat and muscle interchangeably makes about as much sense as saying that a healthy lunch could include either a pound of kale or a pound of whipped cream.

But the unnamed teen doesn't stop there; she goes on to call out the administration for teaching BMI in a school setting, where many kids are struggling with body acceptance issues. She describes wearing four bras and an ace bandage to try to corral her torso into the perfect shape, even when she knew that she was "strong and powerful." Her mother brought her to a doctor, who assured her that while she was "a bit overweight," she was perfectly healthy, and he wasn't worried. Her post reads:

So this is where I don't calculate my BMI because my doctor, a man who went to college for eight years studying children's health, told me my height and weight are right on track. I am just beginning to love my body, like I should, and I'm not going to let some outdated calculator and a middle school gym teacher tell me I'm obese, because I'm not. My BMI is none of your concern because my body and BMI are perfect and beautiful just the way they are.