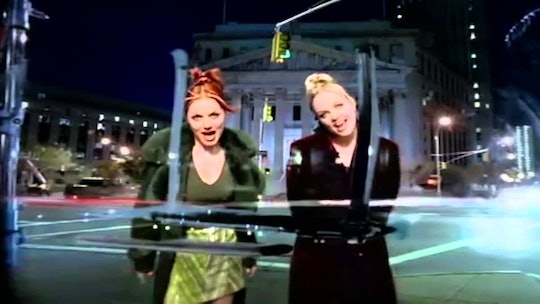 Oh, to be an innocent young thing growing up in the 1990s. You got the chance to hear some filthy lyrics without ever really knowing what you were saying. And while you had no idea certain '90s songs were about sex, when you listen to them again as an adult, it could not be clearer. Hate to break it to you, but Sir Mix-A-Lot was not singing about a literal anaconda.

It was a decade of tremendous double entendres. It was a time when a catchy acoustic tune by the Dave Matthews Band was actually kind of filthy. And a song called “Pony” was in no way associated with real horses. Sure, at least a few of your friends were worldly enough to catch on and say “Do you know what this is really about?” But alas, literal children like me didn’t get it until years later.

Not that this stopped any child of the '90s from singing along. I have an exceptionally vivid memory of being around eight and riding around the neighborhood in my friend’s go-cart, both of us singing the lyrics of Salt-N-Pepa’s “None of Your Business” at the tops of our lungs. As an adult, this recollection kind of makes me blush with belated embarrassment. But hey: that’s the '90s for you.