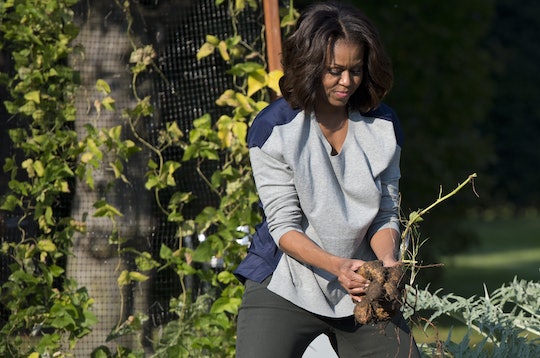 When I was invited to listen to Michelle Obama talk about her Let's Move! campaign to improve the nutrition and health of America's kids, I couldn't help but wonder if she would address the uncomfortable aspect of the conversation: all the criticism Obama has received for Let's Move, which trying to get kids to give up cupcakes, sodas, and fries for kale, sugar snap peas, and water. Thousands of punchlines have landed at the expense of a cause that would have been hard to predict would cause so much drama — giving kids healthier foods to eat. And Michelle Obama doesn't get the joke.

The first lady said at a recent Let's Move event at the White House that, when people try to mock her team's efforts to help America's kids eat healthier, she doesn't think there's anything "funny about our kids' nutrition." And she's got a point. One out of every eight American preschool kids are obese. But Let's Move is making progress. States including Mississippi and California are seeing declines in obesity among elementary schools. But there's still plenty of work to be done.

Here are some of the most common criticisms of Obama's Let's Move! campaign and why they're ridiculous.

Obama isn't in charge of dazzling you with culinary delights developed specifically for your taste buds — she's just trying to get kids nutritious food and save their health (and thus their school performance, their future health, their sleep, etc.). I'm not impressed with your whining.

3. "Kids Eating Fish (Or Other Healthy Foods) Is Not American"

The school lunch standards outlined in the Healthy, Hunger-Free Kids Act were developed by doctors, again, not Mrs. O personally. Also, a piece of fish for lunch isn't going to kill anyone.

4. "The Lunches Look So Boring"

Cheese, crackers, a little deli meat, and a piece of cauliflower is hardly the worst lunch ever. Just eat it and go to math class.

5. "There's Nothing Wrong With The Way Kids Eat Now"

Stats on childhood obesity show that this just isn't true. It's like people think it's Michelle Obama's fault that you can't eat pizza and milkshakes every day and be healthy. It's not — it's just nature people. Your bodies are not meant to eat that way all the time.

6. "Kids Are Starving & Will Be Forced To Eat Out Of Vending Machines"

If these kids were really "starving" they'd eat the lunch and move on. Additionally, the fact that kids want to eat more junk food doesn't mean that's the food that's best for them. The first lady and Let's Move are working with schools to limit selling junk food in vending machine sales and they are striving to curb marketing of unhealthy foods at schools. Next, they're planning to take on school fundraisers that sell unhealthy foods.

7. "But What About Birthdays? You're Seriously Going To Stop Cupcakes In Class On Birthdays?"

Not having birthday cupcakes at school has been hard for many parents to take, according to Let's Move officials. But Dr. Katie Wilson, who works on school nutrition for Let's Move, said it's time for everyone to change their thinking and find ways to celebrate at school that don't center around food. "You can celebrate a birthday without a cupcake," she said when I visited the White House to learn about Let's Move.

It might not be as tasty as fries and a soda, but the first lady's Let's Move! efforts are working. Centers for Disease Control says childhood obesity rates fell by 43 percent between 2004 and 2012, saving the country trillions in potential health care costs.

9. "Michelle Obama Is Ruining The 'Fun' Of Lunch"

Eating healthy isn't going to "ruin" anyone's life, and it certainly isn't going to make lunch or socialization less fun for kids. It's obvious Obama is in the midst of an ugly food temper tantrum with a large part of the country. But, what's equally apparent, is that she and her Let's Move team aren't going to back down anytime soon. So everyone can just stop complaining and eat their peas.