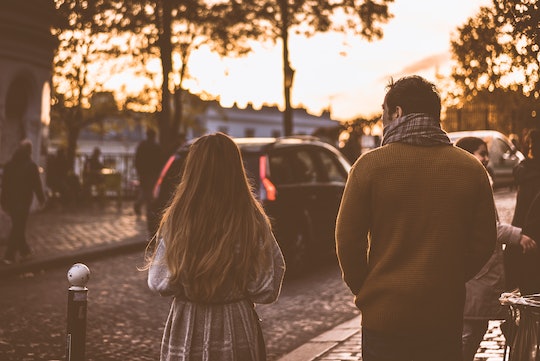 The end of a relationship is, more often than not, emotionally draining. It's hard to adjust to being alone, to accept that the person who's been a near-constant presence in your life isn't around anymore, and to recognize that your life really is going to change. When you realize that you and your partner weren't meant to be, you probably wished that you could've found all of this out sooner, so the break up wouldn't be quite as painful. Well, there are some early signs a relationship won't last — you just have to know how to spot them.

You'll likely have more failed romantic relationships in your life than successful ones. That's just how life is. That being said, there were probably clues early in each of your failed relationships that pointed to the fact that it would end, you just didn't recognize them for what they were. Some people, for example, think that fighting is a bad omen. In an email exchange with Romper, however, associate professor of psychology at Syracuse University Laura Vanderdrift says that some fighting within a relationship can actually be beneficial, and isn't necessarily a sign of terrible things to come. If those arguments start to become overly critical, nasty, condescending, or full of contempt, however, it might be warning sign that the relationship is doomed.

If you and your partner exhibit these relationship warning signs, that doesn't necessarily mean that all hope is lost. But recognizing what they look like might help you tackle them head-on and make your relationship stronger in the long run.