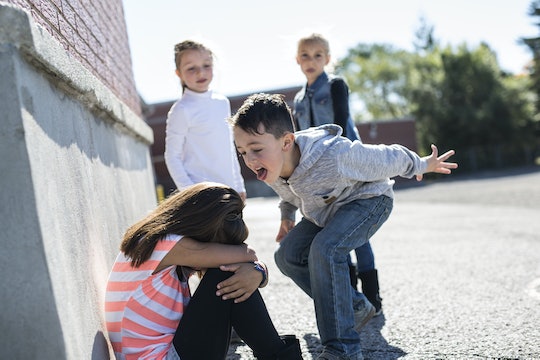 9 Early Signs Your Child Could Be A Bully

It's hard to picture your child as the aggressor in an bullying situation. But, as hard a pill as it is to swallow, noticing that your child has certain behaviors should send up some red flags. It possible the early signs your child will be a bully are right under your nose, but it's easy to dismiss these tendencies as developmental growing pains or challenging personality traits if you don't know what to look for. Some of these behaviors can seem like typical adolescent behavior when seen on their own. But concern should be raised when one or more of these signs appear together or one specific behavior becomes an ongoing issue.

More Like This
Vaccinated People Can Ditch Masks. Where Does That Leave Kids?
30 Cheap & Easy Summer Activities For Kids
This Is Why Your Toddler Wants To Feed You All The Time
Is The Tooth Fairy Real?

According to Very Well, there are two types of bullying: physical and relational. As the site explained, the former includes hitting, kicking, taking something away, while the ladder involves excluding someone, spreading gossip about them, or making fun of them. And it can start at a very young age. Although the research is relatively new, experts agree that bullying exists in children as young as kindergarten, and behaviors can range from hiding shoes, to destroying a picture, to saying nasty things, to refusing to sit beside the targeted child, according to Education.com. Signs of bullying in young kids are easier to spot because they are more noticeable, which means parents should stay vigilant for these nine tells of budding bullies.