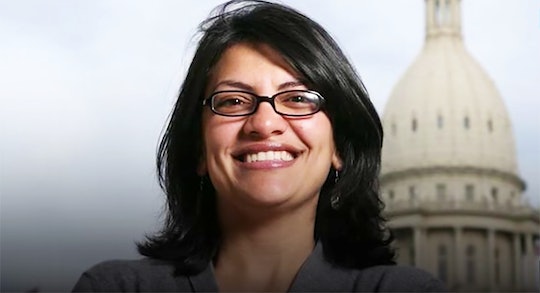 Both Democrats and Republicans sweated it out on Tuesday night as special elections and primaries took place across the states of Ohio, Kansas, Michigan, Missouri and Washington. Many of the races were too close to call, including the Democratic primary in Michigan's 13th Congressional District. Former Michigan Rep. Rashida Tlaib and Detroit City Council President Brenda Jones were neck and neck up until Wednesday afternoon when an official winner was declared. Tlaib won the Democratic primary, according to The New York Times, and she's slated to win the congressional seat come November elections. And if you're not yet familiar with the Democrat's name, there's a good chance you'll want to be because Tlaib's win is historic. In fact, Rashida Tlaib will be the first Muslim woman in Congress if all goes as expected in November. On that note, here are nine facts about Tlaib's impressive life and career thus far.

UPDATE: On Nov. 6, Tlaib became the first Muslim woman elected to Congress in Michigan’s 13th Congressional District, according to Vox.

EARLIER: Tlaib, a proud Muslim and former Michigan state legislator, gave a moving speech on Wednesday when she was finally declared the winner of the close primary election. “I want people across the country to know that you don’t need to sell out,” Tlaib told her supporters, The New York Times reported. “You don’t have to change who you are to run for office — and that is what this country is about.”

As one might expect, Tlaib's poignant speech resonated with a lot of people, especially with those who are Muslim and practice Islam. Tlaib's win is a big step forward for Muslims fighting for respect and equality in the United States, especially when you consider hate crimes against Muslims in the United States rose 15 percent in 2017, according to a study conducted by the Council on American-Islamic Relations.

Of course, Tlaib didn't win the election on luck or by chance; Tlaib ran a strong campaign based on progressive values, and she never shied away from her Muslim identity. But wait — that's not all. Here are nine more facts about Tlaib that will make you admire her even more.

1. She's No Stranger To Historic Firsts

Impressive people tend to come from impressive backgrounds, and Tlaib is no exception to this phenomenon. Case in point: In January 2009, she became the first ever Muslim woman to serve in the Michigan Legislature. And now it looks like Tlaib will nab another historic first in November when she runs unopposed for the seat left vacant by former Michigan Rep. John Conyers.

2. She's The Daughter Of Palestinian Immigrants

Tlaib's parents immigrated to the United States from Palestine before her birth in 1976, and her father landed a job at Ford motor Company in Detroit as an assembly line worker, according to The Washington Post. It's also interesting to note that Tlaib's parents raised a total of 14 kids, according to the Toledo Blade, a feat that wasn't without any difficulties.

Unsurprisingly, Tlaib is proud of her hardworking parents and she spoke about her desire to honor them if she won the election. Tlaib said in April, according to Voices of NY:

I will wear the traditional Palestinian dress and take my oath of office on the Quran if I win a seat in Congress. This is my promise to my parents – my Jerusalemite, Bet Hanina-born father and my mother, a farmer who was born in Beit Ur al-Fauqa – and to my Arab, Muslim, and Christian communities, and to members of my electoral district in Michigan.

3. She's Not Afraid To Stand Up To Trump

It's no secret Tlaib is no fan of Trump. In fact, Tlaib got kicked out of Trump's speaking event at the Detroit Economic Club on Aug. 8, 2016, according to The Washington Post. Tlaib — enraged by Trump's offensive rhetoric about Muslims and his attack on the Gold Star Khan family — yelled at one point, the Detroit Free Press reported: "Have you ever read the U.S. Constitution? You need to read the U.S. Constitution!" Additionally, Tlaib also screamed, "Our children deserve better" before she was escorted out of the event.

4. Her Resumé Is impressive

In addition to Tlaib's impressive political career, she has also worked as a public interest lawyer for for the Sugar Law Center for Economic & Social Justice, according to the Michigan Daily. The Sugar Law Center states on its website: "Founded upon the principle that economic and social rights are civil rights and human rights, the Sugar Law Center seeks to empower low-income individuals, families, and communities."

Equality is one of Tlaib's core values, and this is evident in her stance concerning LGBTQ rights. Tlaib states on her campaign website:

I have been an unwavering ally of the LGBTQ community and will fight relentlessly to ensure that no matter how you identify, and no matter who you love, every person in this country enjoys full and equal civil rights. Conservative courts are determined to impose their ideology to deny rights to LGBTQ individuals and we must resist these attacks together.

Tlaib is the mother of two young sons, Adam and Yousif, according to CNN. Tlaib often posts pictures of her boys to Instagram, and she makes it a point to include them in her campaign. Tlaib even mentioned how her sons' fear concerning Trump's anti-Muslim rhetoric deepened her personal convictions.

7. Her Platform Is Progressive

If you check out Tlaib's campaign website, it's clear she stands for a lot of progressive causes. From Tlaib's support of preventing cuts to Social Security, Medicare, and Medicaid to her views about protecting the environment, it's clear Tlaib wants to make America a better place for people from all walks of life.

8. Her Brother Bought A Golf Cart For Her Campaign

One of Tlaib's brothers, Rachid Elabed, purchased a golf cart to help her campaign, a gesture that is incredibly sweet. Elabed ended up reaching more than 4,000 voters in the golf cart, Detroit News reported.

"It's actually a joke in the family among all of us. Rachid and his golf cart helped us," Tlaib told Detroit News. "It was a crazy idea, but it worked."

9. Her Grandmother Influenced Her Attitude About Life

Early Wednesday morning Tlaib spoke of her grandmother's influence on her life and how it shaped her will to fight back against the Trump administration. “I’m going to push back against everything that’s so un-American that’s coming out of this administration,” Tlaib said, The New York Times reported. “My grandmother told me never to let a bully tell me, 'can I do this?' or 'you can’t do this.'" Tlaib's grandmother sounds like one amazing woman.

Now that you're all caught up on Tlaib's admirable background, be sure to keep an eye her come November. Although it's expected Tlaib will likely win the election because no Republicans or third-party candidates are running against her, it's still important to pay close attention to the race. Tlaib's foreseeable win is exciting, and voters shouldn't miss this chance to participate in such a historic moment.