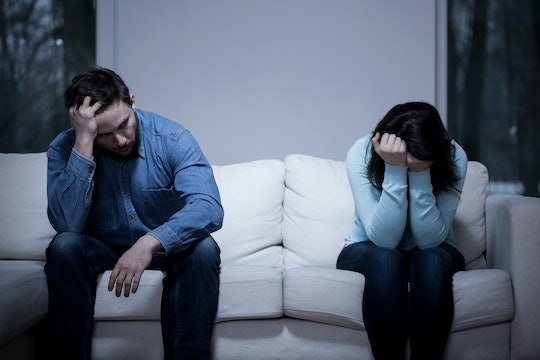 It's a crazy statistic to think about, but almost half of marriages in the United States don't last, according to research conducted by the American Psychological Association. On top of that, second and third marriages have an even higher rate of divorce in the U.S. But is there a way to know whether your relationship will last or not? Turns out there are some fights between couples that can predict divorce.

From endlessly arguing over money, to whether to have kids, there are some common fights that stand out as indications that your relationship might end in divorce. Most of the research out there points to different fighting styles that can either complement or detract from your successful marriage. According to a 2010 University of Michigan study that followed newlyweds for 16 years, there are four key behavior patterns that, when done repeatedly, can be the "'kiss of death'" for your marriage. Indicators include constant criticism, contempt, and defensive behaviors. While some fights can be constructive, the research concluded that couples with destructive conflict behaviors within the first year of marriage had higher rates of divorce.

The also found that couples who were more on the same socioeconomic level may fight differently than couples who had a substantial wage gap between them. The study was an updated version of one The Gottman Institute conducted in the '80s, that said that couples with opposite fighting styles were more likely to divorce (i.e. an avoider or conflict minimizer paired with one who always wants to passionately duke it out). So what kinds of fights can lead to divorce? From financial tension to a build up of small, seemingly inconsequential things, here are nine fights that can predict divorce.

More Like This
Everyone Told Me To Date Post-Divorce, But Being Alone With My Kids Felt Better
Snap A Pic Of Santa In Your Living Room With These Free Apps
The 35 Top Toys For 3-Year-Olds
60 Bits Of Christmas Trivia To Delight Your Friends & Family