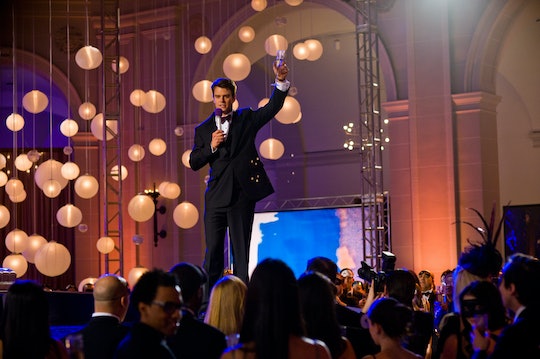 For whatever reason, New Year's Eve can sometimes feel like a solemn occasion, a time when where you're supposed to look forward to the months ahead, write down resolutions, and start getting inspired to live your best life. Not to take away from that feeling or anything, but the evening before Jan. 1 is also a good time to lighten up and not stress so much about the months ahead. If you're worried you're simply too Type A to do that, try reading a few funny New Year’s Eve quotes before heading out for the evening. They'll make you crack a smile and remember that no matter what, this evening—and what it represents—is a time to have fun, too.

Yes, more so than any other time of the year, New Year's Eve lets you get a good sense of where you are and where you want to be in the coming months ahead. It's a good idea to start planning the steps you'll take to address those ambitions and get a head start on those life goals. On the other hand, it's also good to remember not to take these things so seriously, and that for better or for worse, you have plenty more time other than the night before the new year to worry about it all. So set aside the time to laugh for a brief moment with a few of the funniest New Year's Eve quotes that celebrate and focus on the good (and hilarious) times.

"Dieting on New Year's Day isn't a good idea as you can't eat rationally but really need to be free to consume whatever is necessary, moment by moment, in order to ease your hangover. I think it would be much more sensible if resolutions began generally on January the second." — Bridget Jones's Diary

"Everyone's chasing a good time, and it's always a disappointment. I plan on doing nothing and then if something lands in my lap — but I always end up drunk and disappointed. Drunk and Disappointed should be the title of my memoir!" — Jennifer Lawrence

"I always like New Year's because it's so bizarre to me that we're dunk, we're counting backwards." — Ted Alexandro

"An optimist stays up until midnight to see the New Year in. A pessimist stays up to make sure the old year leaves." — Bill Vaughan

"Remember that New Year's Eve party at Lenny's? He didn't even have a clock." — The Simpsons

"May the New Year bring you courage to break your resolutions early! My own plan is to swear off every kind of virtue, so that I triumph even when I fall!" — Aleister Crowley

"New Year's Day... now is the accepted time to make your regular annual good resolutions. Next week you can begin paving hell with them as usual." — Mark Twain

"What you do for Jewish New Year is you go down to Times Square. It's a lot quieter than the regular New Year. It's just a few Jews walking around going, 'sup?'" — John Stewart

"May all your troubles last as long as your New Year’s resolutions!” — Joey Adams

More Like This
Ginger Zee Had A Perfect Response After A Troll Asked Her "Who's Raising Your Kids?"
It's A Beautiful Day In Jenny Slate’s Neighborhood
Toe-tally Cute Summer Pedicure Ideas
Family Of Grandfather Killed In Highland Park Mass Shooting Say He "Saved" Their Lives