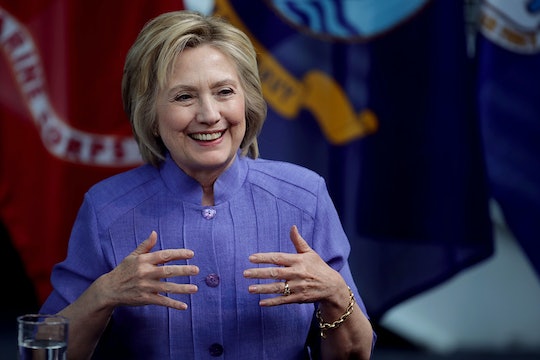 Saturday is the one-year anniversary of the Supreme Court of the United States decision to rule that banning same-sex marriage is unconstitutional in the United States. The SCOTUS 5-4 decision was historic, important, and celebrated across the country, and rightfully so. Though LGBTQ communities are still systemically marginalized and face many barriers and discrimination, the SCOTUS decision allowed same-sex couples the same, and long-overdue, marital legal rights as heterosexual couples. So, in honor of the anniversary of the same-sex marriage decision, and the presidential campaign, here are nine Hillary Clinton quotes about LGBTQ families that show the complicated history of the presidential candidate's and the country's public opinion on LGBTQ rights. Because it's certainly been a long journey, with still a lot of work left to be done – one unsettling example being that transgender people of color are disproportionately marginalized and more likely to become victims of hate crimes.

When SCOTUS ruled to legalize same-sex marriage last year, Clinton tweeted in support of the decision and released a statement that celebrated the victory:

Today is one of those days we'll tell our grandchildren about. Marriage equality is now the law in all 50 states.From Stonewall to today’s decision, the courage and determination of the LGBT community has changed hearts, minds, and laws. Generations of advocates and activists sacrificed so much for this victory...

In 1996, her husband, then-President Bill Clinton, signed the Defense of Marriage Act (which SCOTUS overturned in 2013) that defined federal marriage as a union between a man and a woman. Clinton has since received backlash for her recent explanations on why DOMA was enacted, labeling it as a defensive action at the time, to stop Republicans from going further with an anti same-sex marriage amendment.

In Clinton's 2000 New York Senate race campaign, and years following, Clinton spoke in favor of civil unions and "domestic-partnership measures," which granted same-sex couples health and financial benefits. According to USA Today, then-New York Sen. Clinton introduced legislation in 2003 that would grant homosexual couples the same rights as heterosexual couples. But she voiced and maintained her position that marriage is between a man and a woman. In Clinton's 2008 presidential bid, she, along with President Obama, voiced opposition to same-sex marriage. Surely, the country and public opinion has evolved and changed for the better when it comes to LGBTQ issues over the last decade. A Pew Research report shows polling data revealing 39 percent of American adults were in favor of same-sex marriage in 2008 compared to 55 percent in 2016.

But Clinton's and every candidate's history on LGBT issues, is important to consider in order to hold leaders of the United States accountable in the future.

1. "Marriage has got historic, religious and moral content that goes back to the beginning of time, and I think a marriage is as a marriage has always been, between a man and a woman." - 2000 Washington Post

3. "Well, marriage means something different. You know, marriage has a meaning that I think should be kept as it historically has been, but I see no reason whatsoever why people in committed relationships can’t have many of the same rights and the same respect for their unions that they are seeking, and I would like to see that be more accepted than it is.” - 2003, New York Times (explaining the difference between marriage and civil unions)

6. "LGBT Americans are our colleagues, our teachers, our soldiers, our friends, our loved ones, and they are full and equal citizens and deserve the rights of citizenship. That includes marriage." - 2013 New York Times

7. "I did not grow up even imagining gay marriage and I don't think you probably did either. This was an incredibly new and important idea that people on the front lines of the gay rights movement began to talk about and slowly but surely convinced others of the rightness of that position. And when I was ready to say what I said, I said it." - 2014 Terry Gross Interview NPR

8. "For me, marriage had always been a matter left to the states. And in many of the conversations that I and my colleagues and supporters had I fully endorsed the efforts by activists to work state by state..." - 2014 New York Times

9. "Every loving couple & family deserves to be recognized & treated equally under the law across our nation," - 2015 Clinton's Twitter account

Clinton has still hit some recent bumps on LGBTQ issues. The former Secretary of State received backlash for a past email that showed her grievance with using gender neutral terms for "mother" or "father" on passports, and for her misguided praise for Nancy Reagan's "low key advocacy" on HIV and AIDS. Clinton's full and unequivocal support of same-sex marriage today is important, but it continues to be important to push and hold all candidates, elected officials, and anyone who aims to be a leader, accountable on their support for LGBTQ rights and all human rights. There's still a long road ahead to equality.