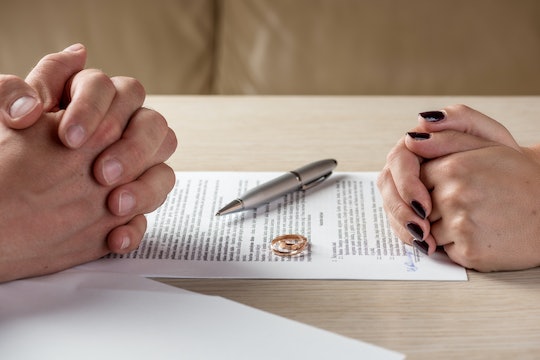 The Worst Questions Anyone Could Ask Post-Divorce

What is it with all the questions about a dead relationship? In my experience, they're really just judgement masked with curiosity or genuine concern. I get that when you're rooting for a couple to work things out and they don't, you might feel a little disappointed or duped. This was never more true than when I went through a major split with my first husband at 22. However, some of the infuriating questions people will ask you after you get a divorce are just uncalled for. Like, it's already hard enough, so do you really have to?

Having married out of high school at barely 18, my relationship was mostly cemented in faraway dreams and future uncertainty. Yes, we loved one another, but now that I'm re-married with the father of my two children, I see it wasn't the same kind of love. We tried for years to make it work but when it came down to it, we didn't want to be — and shouldn't have been — married.

We separated a couple different times before I finally left for good. The divorce itself took longer than expected, which only fueled all the seemingly endless questions from friends and loved ones. In everyone else's opinion, depending on who you asked, we either did't fight hard enough or we were bound to fail at some point. It seemed like no matter what we did, we couldn't win. Regardless, some of the questions were infuriating and even if well-intentioned, they didn't help. So if you're thinking of asking any of the below to someone recently divorced, don't.